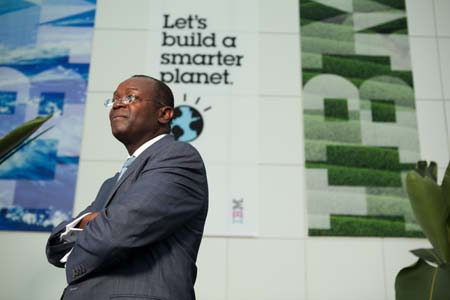 A few months before its centennial anniversary celebration, IBM faced one of its greatest challenges. The battle wasn’t against global competitors over market share. The arena was the popular TV quiz show Jeopardy! Big Blue was participating in a showdown that pitted man against machine. Can a computer outthink the human brain?

Two of the challengers vying for the $1 million grand prize were Jeopardy! champs Brad Rutter, the game’s highest-grossing player with $3.3 million in winnings, and Ken Jennings, winner of the most consecutive matches in the show’s history. The third was a room-sized computer system named Watson–after IBM’s founder, Thomas J. Watson–that can rapidly process and analyze natural language including puns, riddles, or complex questions. Positioned between the two human players, Watson, who spoke in a synthesized, electronic voice, seemed the embodiment of IBM’s Smarter Planet initiative focused on using intelligence to drive innovation for global solutions.

When the challenge aired in February, Jeopardy! host Alex Trebrek sought responses from the contestants on topics such as literary characters, the Beatles, and Olympic oddities, with Watson receiving the clues via text file. The computer quickly emerged as the dominant player. By the first commercial break, Watson had answered 10 of 13 questions and amassed $5,200 while Rutter had won $1,000 and Jennings just $200. Watson would continue this drubbing over three matches and eventually take the $1 million pot (which was donated to charity). It was IBM’s first tech vs. human victory since Deep Blue checkmated chess champion Gary Kasparov in 1997.

Friday at the Movies