Since his election to chairman of the Republican National Committee, Michael Steele has faced a great deal of criticism.

BlackEnterprise.com asked readers whether they agreed with some of Steele’s detractors and the vote was split evenly. One-third of respondents said he should resign, another 1/3 said he shouldn’t. The remaining respondents didn’t care either way.

Believing that he was profiting personally, from his chairmanship, many conservatives were displeased to learn that although he received a salary from the GOP, he had been accepting money for speaking engagements and wrote a book titled Right Now: A 12-Step Program for Defeating the Obama Agenda (Regnery Press; $27.95). Then he openly criticized the Republican Party, saying that the party has no chance of recapturing the House during November’s midterm elections.

His latest faux pas happened last month when news broke that an RNC staffer spent close to $2,000 for an official gathering at a bondage-themed strip club in California in February, as well as tens of thousands of dollars on luxury hotels and private jets. In addition, although the RNC raised $11.4 million–a record high for a mid-cycle March–the Democratic National Committee topped that with $15 million raised in the same month.

“I believe that the best service you can render to your party at this critical juncture is to graciously step aside and allow the party to move on from this current quagmire,â€ said Tom Fetzer, chairman of the North Carolina Republican Party, in a letter to Steele.

Congressman Mark Kirk (R-Ill.) hesitated to ask for Steele’s resignation but said he wants Steele to make some staff changes and bring more transparency to the party.

But not everyone is gunning for the former lieutenant governor of Maryland. Under Steele’s leadership the RNC has “outraised the Democratic National Committee in more than one quarter as far as fundraising and been able to bring into the fray a slew of new candidates for congressional, Senate and gubernatorial races,â€ said Princella Smith, a black Republican candidate for Congress in Arkansas, who worked previously as the national spokesperson for Newt Gingrich’s organization American Solutions and with Michael Steele’s campaign for lieutenant governor. “I think we need to stick it out with him. There are some things that need to be tightened up in the RNC…but overall he is doing a good job.â€

BlackEnterprise.com conducted the poll between April 13 and April 20. 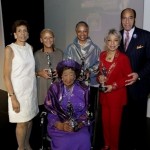 We Mourn Dorothy Height’s Passing and Celebrate Her Life

The Color of Money