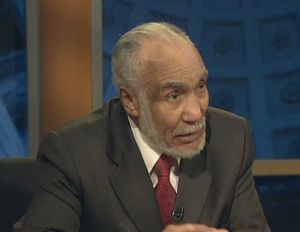 The NY Daily News has reported the death of longtime political insider, Basil Paterson today. His family announced that he passed away Wednesday night at Mt. Sinai Hospital in New York after an extended illness.

Before his son, Ex-New York Governor, David Paterson, got a chance to enter into the arena of politics, Basil served in the state Senate in the ’60s, and was appointed by Mayor Ed Koch in 1978 to be a deputy mayor. He made history when he became New York’s first black secretary of state under Gov. Hugh Carey. Of course, his son became New York’s first black governor.

Assemblyman Keith L.T. Wright says, ‘Today I join all of Harlem, the state of New York and the nation, in mourning the passing of one of our proudest and most courageous icons, Basil Paterson. This profound loss is deeply felt by me, personally. I have met many men and women throughout my life, but very few have inspired me as greatly as he did on what it means to be an exceptional leader, public servant and dignitary. His legacy, cemented in greatness by a lifetime of defending those who society had denied a voice, will live eternal in the soul of Harlem and in the hearts of all those who were blessed to have known him.

And Rev. Al Sharpton, President of NAN, released his own statement saying, ‘I have had the honor of knowing Basil Paterson since I was a teenager leading the youth division of Operation Breadbasket.Â In later years, my respect for him continued to grow due to his awesome intellect and his incomparable knowledge of how to get things done.Â He was a firm but gentle giant who brought us all to another level. As a contemporary and close friend of his son David, Basil Paterson fathered us all.Â He brought us to the era of our nation’s first Black President & Attorney General, which was unimaginable when he first started his journey. Basil Paterson ran his race against time and at the end of the day he beat all odds and changed history’

Paterson is survived by his wife, Portia and two sons, Daniel and David.

‘Soul Train’ is Making a Stop on Broadway

Dr. Ian Helps Us Battle the Bulge on Twitter Chat