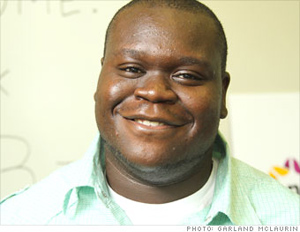 It’s there that BlackEnterprise.com caught up with Frasier. Many recognize the 26-year-old from CNN’s Black in America: The New Promised Land — Silicon Valley, but there’s more to his story than what viewers saw on the hour-long special.Â  The Newark, NJ native doesn’t hide behind his rough past and the fact he dropped out of college. In fact, Frasier remarks it only makes him work that much harder. He founded The Koalition, a gaming site for urban youth; a meetup group called BrickCity Tech and, as seen on the cable network’s fourth installment, co-founded the gamers’ app Playd.

BlackEnterprise.com spoke with the NewMe Accelerator participant about life after Black in America, the importance of mentorship, and what’s next for the young tech entrepreneur.

What have you been working on since people saw you participating in the NewMe Accelerator on CNN’s Blacks in America: Silicon Valley?

Since I’ve been back, I’ve been pretty much working on user acquisition, just building my user base. That’s all I’m concerned about is getting in front of gamers, going to every game conference I can.Â  That’s pretty much what it’s all about.

For someone who might not be familiar with your gamers app Playd.Â  What is it? Explain its offerings and how it compares to other apps within the same category.

It’s almost like a Foursquare for video games. It lets you check into your games, share what you’re playing with your friends across your social networks, but we’re moving into an area that hasn’t been moved into before like trying to have the first digital loyalty system for video games. So what we want to do is start rewarding players for playing games by giving them digital rewards and actual, real incentives that they can redeem with game publishers such as EA.

That would be really huge, especially when it comes to getting rid of the number of users who go out and buy second-hand games–used games–which is hurting publishers like EA–$2 billion a year almost.