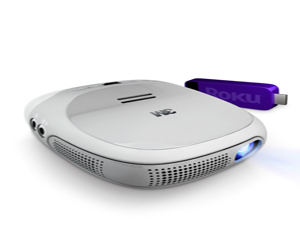 Roku and 3M introduced a new streaming device which retails for $300 (Image: Roku) Roku and 3M introduced a new streaming device which retails for $300 (Image: Roku)

Roku and 3M recently created a ripple in the home projector market with the debut of the 3M Streaming Projector powered by Roku, a projector small enough to stuff into a pocket, but sophisticated enough to wirelessly stream video content from the Internet without the need of a computer.

Since the $300 projector has a rechargeable battery and a speaker, and doesn’t need to be wired to a video source, you could hold it in your hand (a table, of course, is better) and project video images of up to 120 inches on any wall at home–or even at an Internet cafe.

What gives the $300 unit its wireless capability is the Roku Streaming Stick, a device which looks like a large flash drive but actually has a built-in Wi-Fi adapter and can link to the Internet from any Wi-Fi hotspot. The projector has access to Roku’s more than 600 free and paid channels of video content, including Netflix, Hulu Plus, Crackle, Amazon Instant Video and Major League Baseball.

Channel selections and other adjustments can be made with the included remote control, through the Roku website or via free Roku apps for iOS and Android smartphones and tablets. For $20, users can upgrade to the Roku Game Remote, which has a motion sensor, thus allowing users to play Angry Birds and other video games.

The Roku Streaming Stick can be removed from the projector’s combination HDMI/MHL (mobile high-definition link) port and used in an HDTV with an MHL port. When the stick is not installed the 3M unit can be wired to a video source with an HDMI cable like a conventional projector.

So is the 3M Streaming Projector powered by Roku that much of a game-changer? Yes and no.

The answer is yes as far as portability and versatility go. For example, you can use it at night outdoors without a power source as long as you had a Wi-Fi connection. The answer is no when it comes to brightness and image resolution. The DVD-quality, 800-by-480-pixel image isn’t HD-quality and the 60-lumen LED light source is best used in darkened rooms as opposed to brightly lit conference rooms.

A good comparison is the eight-ounce, $379 Optoma PK301+ pico projector introduced earlier this year. While it can’t connect to a video source wirelessly, it has mini HDMI and micro USB connectors as well as a universal input/output port which can be used with adapter cables. The unit is compatible with a wide variety of video sources, including smartphones and set-top boxes. Also included are an internal rechargeable battery and a microSD slot for removable memory cards with storage capacities of up to 32GB.

The 75-lumen light source on the 854 x 480-pixel-resolution Optoma PK301+ is brighter than the 60-lumen LEDs in the 3M projector, but that brightness is available only when connected to its AC adapter or to an extra-cost extended battery. The internal battery provides 45 minutes of 25-lumen light but the extended battery pushes video life to up to two hours at 75 lumens. By comparison, the battery on the 3M unit can last more than two hours but here again that depends on LED brightness, which can be adjusted with the remote control.

On balance, the 3M Streaming Projector powered by Roku provides a reasonable array of features given its price point. It won’t replace a business-class HD projector, but the DVD-quality image and the overall ease of use should result in a good home video experience. The Optoma PK301+ would also fit in well for home use, but its connectivity options make it a good choice for traveling business workers as well.