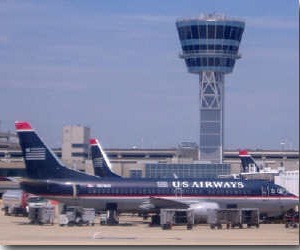 According to a press release released on Tuesday, Leadership of the African-American Chamber of Commerce of Pennsylvania, New Jersey and Delaware have come together in a partnership entitled “Protect Our Hubâ€. This campaign was created in response to a potential merger between US Airways and American Airlines which the group feels threatens jobs and the status of Philadelphia International Airport as a major hub.

Many in the group point to a similar merger that took place in Pittsburgh InternationalÂ  airport seven years ago. US Airways cut flights and closed gates following a merger with America West Airlines, which resulted in more than 10,000 people losing jobs.

“From our perspective, if US Airways merges with American Airlines, our fear is that the new airline could downgrade its Philadelphia International Operations which would mean fewer opportunities for minority and women owned businesses and their employeesâ€ said Steven Bradley, chair of the chamber.

His comments came at a press conference on Tuesday organized by Keyatta Johnson, City Councilman of the district where the airport is located. The Councilman intends to hold hearings to get a better explanation regarding the plans for the merger.

“We find ourselves in the awkward position of questioning the economic and financial decisions of the management of these two carriers. But question we must, because such a merger could threaten the economy of greater Philadelphia and undo all other efforts at the airportâ€, Bradley added. “In order to protect employees, business opportunities for small, minority and women owned business enterprises, and the greater Philadelphia economy, now is the time to take action to ensure that Philadelphia International remains a thriving US Airways Hub.”

The “Protect our Hubâ€ project has setup a website www.cityofbrotherlyhub.com which will be the focal point of the campaign. Via this site, the group plans to educate community leaders, business owners, elected officials and the general public about the ramifications of the potential merger.Â  The Chamber also plans to partner with labor organizations, unions and other interests groups to examine the impact, as well as create a blueprint for action in case the merger does take place.

“At this point, we are not convinced a marriage between US Airways and American Airlines will provide job security for employees, increased travel options for consumers or stability for Philadelphia International Airport.Â  There are simply too many questions to ask and too much history to justify our concerns,” Bradley said.