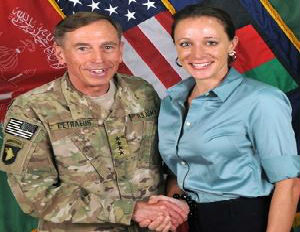 More details are emerging about a mysterious woman close to Gen. David Petraeus, the former CIA director who resigned his post on Friday when news broke of an affair he had with his biographer Paula Broadwell, who is pictured with him (right).

A senior US military official told the Associated Press that Petraeus’ mistress, Paula Broadwell, sent harassing e-mails to 37-year-old Jill Kelley of Tampa, Florida, a woman who was the State Department’s liaison to the military’s Joint Special Operations Command. A friend of both Kelley and Gen. Petraeus told the AP that “she saw him often.” Apparently Broadwell felt threatened by Kelley and Petraeus’ relationship.

When Kelley reported the threatening emails to the FBI, the bureau had a sit-down with Petraeus because they were concerned about a security breach.

“Petraeus decided to quit, though he was breaking no laws by having an affair,” officials said.

“He decided he needed to come clean with the American people,” said Steve Boylan, a retired army officer and former Petraeus spokesman.

Beware of the “Salty Six”: Foods That can Hurt Your Health