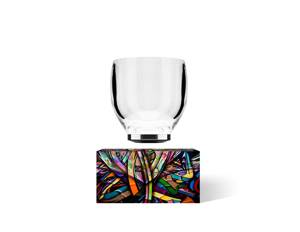 It’s always risky to write about Kickstarter tech projects. First, there is always the chance that the product may never make it to market. Second, there are so many Kickstarter and Indiegogo products, it’s opening up a hornet’s nest just to cover one–the next thing you know, they’ll all want media coverage.

However, sometimes, for whatever reason, you see something on Kickstarter that makes you go, “Whoa!â€ That attention-grabber is the Levitating CUP. It looks like something out of a Harry Potter novel.

The name is pretty self-explanatory. It’s a drinking cup that floats. And it looks so cool.

The Levitating CUP is the world’s first zero gravity drinkware. It’s made up of two parts, the cup and base set which uses the physics principles of “Quantum Locking” to keep it floating in mid-air.

… a process where scientists use the properties of quantum physics to levitate an object (specifically, a superconductor) over a magnetic source (specifically a quantum levitation track designed for this purpose).

The Levitating CUP features aÂ metallic baseÂ that enables the cup to float above a surface at zero gravity, completely weightless, and remain that way uninterrupted indefinitely.

6 Tips to Tighten Your Work Meetings