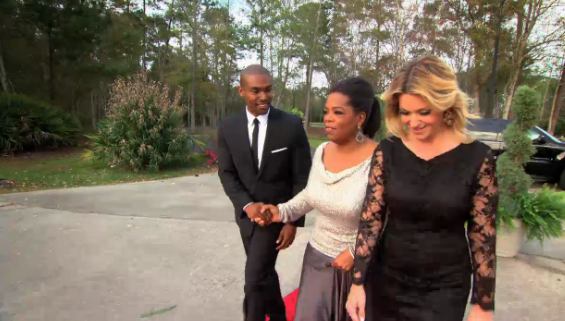 Paul Carrick Brunson transitioned from investment banker and non-profit leader to a highly sought after matchmaker in roughly three years. He now has clients on his waiting list as well as a book deal with Penguin and a TV deal with the Own Network. His book,Â It’s Complicated (But it Doesn’t Have to Be): A Modern Guide to Finding and Keeping Love debuts on October 11. His OWN show, LoveTown, USA premieres on August 19 in the home that Oprah built. Â From Own “On Lovetown, USA, two expert matchmakers take over Kingsland, Georgia for 30 days to help mend relationships of embattled friends and lovers-young and old–and find true love for singles. This social experiment, hwich involves everyone from government Â officials to grade school students will examine how love, grace, kindness an forgiveness can affect an entire community.”

BlackEnterprise.com caught up with Paul to find out how his life and business has been been transform by tv and what it was like working with Oprah.

BlackEnterprise.com: From finance to matchmaking—how did you make the leap? And how did you go from pro bono sessions to a waiting list of paid clients?

Paul Carrick Brunson: Just two and half years ago I was doing pro bono matchmaking work and now I don’t have to advertise – I have a waiting list. Â I’ve gone with my gut with this business a lot. We have a general plan around our goals but I don’t have a specific business plan for this. I realized the issue that I had with my previous businesses that failed was I was so stuck in staying in the parameters – so now I operate off of more of a gut instinct. I listen a lot. I listen to Twitter, etc. and I am able to adapt to what I’m hearing from my audience.

I came off a year of studying matchmaking and coaching. I literally asked friends and said hey if you know of anyone who is interested in matchmaking or coaching and I had maybe 5 referrals. Two of them didn’t sound authentic so I ended up taking on 3 pro bono clients. But I was very transparent. I told them they were my very first clients. They were open. After I had done about 3 sessions with each of them they said “this is wonderful, this is really good.” That gave me a confidence boost that I really needed. When I started, I didn’t know when I would start charging. Subconsciously [their feedback] told me ” I can charge for this.” By that time I had put [an introductory] video on YouTube and I had a web site, and my Modern Day Matchmaker YouTube series.

My videos were syndicated so we would get 2-3 inquiries/ day. One day I said, “The next inquiry that comes in, I’m gonna charge.”

I remember when the inquiry came in. I was nervous. We had some work being done on our house, so I went downstairs to the basement to take the call. I leaned against the washing machine to talk to the guy. Â When he asked what my price was, I was thinking “$2000″ Â but I said verbally ” that will be $1000″. The man on the line said “That’s it?!” The next person that came in I began increasing my rates. I didn’t price myself relative to what others were charging, I priced it relative to my supply and the level of service I was giving.

With each new person I would feel them out. I found out that it took about 6 months of work before we got bankable results so therefore we had to go back and reconfigure the package. At the six month point we were getting breakthrough results so the minimum commitment was 6 months.

Regarding pricing – it ended up being about what we were delivering and what the supply and demand was. We were able to go from free in late 2009 to charging in spring 2010, Â to charging a premium less than a year later based on our confidence and demand relative to our supply.

How do you feel when people compare you to Will Smith’s cheeky character from the movie “Hitch”?

Initially I stayed away from it because I wanted to stay out of that box because people assume I’m just for black people. But now I embrace it because I realize it’s a term of endearment. And it allows people to quickly identify who I am.

Toure Apologizes For N-Word Use In Mitt Romney Discussion