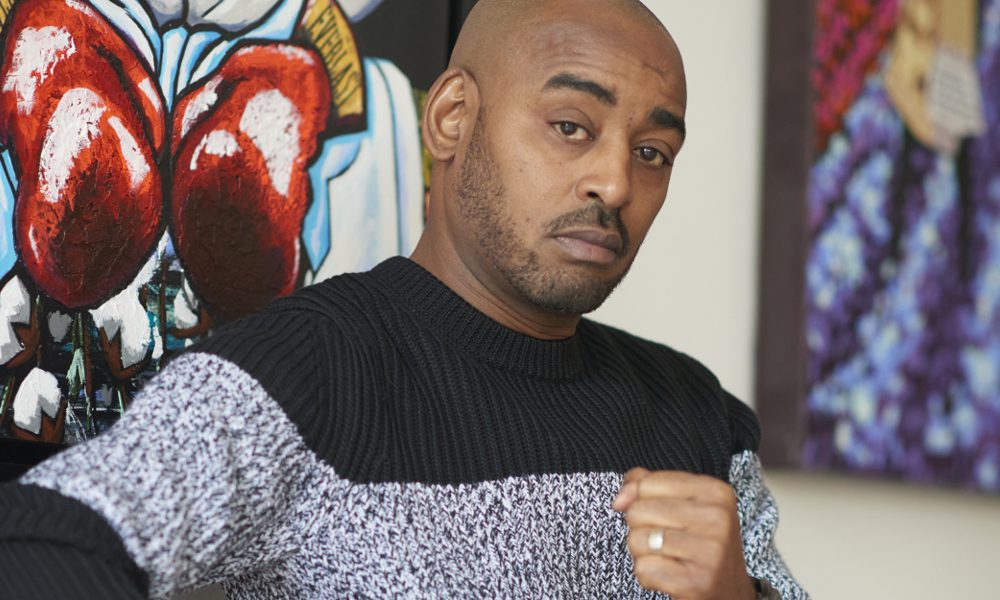 Contemporary fine art gallery owner Richard E. Beavers contributes much of his success to his mother Mary Wilson-Beavers. Pregnant at the age of 16, Mary was told to abort Richard and when she didn’t her parents abandoned her. Faced with the responsibility of having to raise a child as a child herself with very little formal education, limited resources, and hardly any family support she found a way to not only raise Beavers but also thrive as a young mother.

“My mother always maintained full-time employment to make certain I had a stable environment,” Beavers tells BE Modern Man. “While working full time, she returned back to school to continue her education and graduated from college with a degree. After many successful years in corporate America, she ventured into the world of entrepreneurship by pursuing her passion as a landscape horticulturist. Needless to say, her business was successful.”

Constantly exposed to life outside of the confinements of his neighborhood, Beavers experienced aspects of the arts and culture from museum and gallery visits, Brooklyn Botanic Garden, theatrical productions, and little league sports.

Beavers says, “During my early tenure working at MTV Networks in the early 90s, there was an art exhibition during Black History Month featuring an artist named Alonzo Adams. Adams had a painting on exhibit entitled “The Journeyman.” This image of a black man shirtless and barefoot, with a pair of blue jeans and knapsack over his shoulder walking into a tunnel of darkness, gave me goosebumps. The man in the painting was me.”

For Beavers, this image represented the uncertain place he was in at that juncture in his life. It was less than a year since he had been incarcerated, obtained a GED, and graduated from a word processing course at NYC College of Technology.

“As I was embarking on this new path in my life for the better, seeing the painting was a defining moment, Beavers tells BE Modern Man. “It was a confirmation that I wasn’t alone in the world and that there was someone else who was starting over again not certain of what the future may hold.”

A Black Enterprise feature story on a woman named L. B. Brown, who was the owner of Clinton Hill Simply Art Gallery and Framing located in Fort Greene, Brooklyn, caught Beavers attention. After introducing himself to her and having a brief conversation, Beavers offered his services to work with her on the weekends.

“I worked with Ms. Brown for several months and I knew that I had discovered not only my passion but a profession where all aspects of the business came naturally to me.”

For Beavers, being surrounded with like-minded individuals who encourage and supported his vision was instrumental in turning his passion into a profitable business.

He advises, “Seek out a mentor in the profession/business venture that you’re interested in pursuing. Read, read, and read to obtain as much information possible so that you’re extremely knowledgeable about your business venture. There shouldn’t be any job in the career that you’re interested in that’s beneath you. Many of our most decorated entrepreneurs started at entry-level positions and learned all aspects of the business. Live, breathe, and dream your passion. It’s also very important to establish short-term, mid-term, and long-term goals. Having goals that are obtainable will continue to keep you motivated. When evaluating yourself, be brutally honest; seek out the opinions of your trusted circle. Always “pay it forward.” Finally, remember the first key to community is the sharing of information.”

As a man with strong character, Beavers wants his impact to extend beyond the walls of his gallery that is frequented by sports and entertainment stars, and notable community figures.

“I would like my impact to be that mass assimilation is not necessary to be successful,” says Beavers. “Being pro-black, and unapologetically black does not equate to anti anything, it just simply means I want what’s best for black people. Moving forward in my career I would like to continue to use art as a means of communication to educate, inspire, uplift, and raise the consciousness of those that patronize the gallery. It’s also imperative that I continue to expand on the gallery’s community outreach initiatives through workshops, educational seminars, and also continue to work with local schools whose arts budgets have been decimated by bringing our “Art in Schools” programming into their classrooms.”

An ordinary man coming from humble beginnings who understands that materialistic possessions don’t determine one’s success. Coming from a fatherless home, Beavers realizes the importance of being actively involved in the daily life of his children.

“The positive impact that an individual is able to make in the lives of others through the blessings that you’ve been given is the true measure of success. We may not realize it at the time, however, we are all vessels being used for a bigger cause.”

Evolving from being a ninth grade high school dropout who was formerly incarcerated with very little professional skills to being a self-employed successful entrepreneur and owner of Richard Beavers Gallery (established in 2007) that just celebrated its nine-year anniversary is what a BE Modern Man represents. He is an example of the infinite possibilities that exist for black men. It represents the accomplishments of our community. The pride of our ancestors whose blood, sweat, and tears opened these doors for each and every one of us to have the opportunities that exist today. BE Modern Man means WE.

6 Strategies to Profit in Any Market