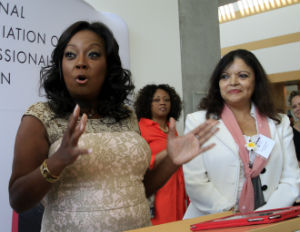 When you think of Star Jones, you probably think of her as one of the hard-hitting hosts on the ABC hit daytime talk show The View, or her role as a spokesperson for such high-profile causes as the American Heart Association’s (AHA) National Go Red, or her highly successful legal career, which included a stint as senior district attorney for the city of New York.

You may not think of Jones as one of only a handful of African American women in the United States to lead a publicly traded company. That’s exactly what happened when the Professional Diversity Network, Inc. (merged with the National Association of Professional Women NAPW), which trades on the NASDAQ stock exchange under the stock symbol IPDN, joined forces in September 2014 and appointed Jones to the role of president of the newly formed entity.

Not only does Jones sit atop the corporate ladder, but she uses her perch to advance NAPW’s mission to provide women with the tools and resources needed to help them achieve “professional success, social wellness, and financial security,â€ according to their website.

BlackEnterprise.com recently caught up with Jones to discuss her new role and why she feels women, minorities, and members of the LGBT community are poised to take their rightful seats at the “corporate table.”

BlackEnterprise.com: In your role at NAPW, you are quick to point out to the business community that in order to be relevant, they need to be inclusive. Can you elaborate on that?
Jones: The browning of America is coming. Â If you want to be relevant you’d better jump on board. Every study about gender and diversity has shown improvement in every aspect of the business when you have a diverse workforce.Â  Inclusion is simply good for business. Your consumer base is going to be black, Asian, Latin American, disabled, and/or part of the LGBT community. That’s who needs to be sitting at your table. That’s who your consumer base is going to be.

Let’s talk about gender for a moment. We all know about the pay gap, particularly for black women, who earn 64 cents for every dollar that a white male makes. There is also more of a discussion about women needing to be more assertive and the need for them to be proactive when it comes to things like salary negotiation. What are your thoughts on that?
We want women to be hired for their skill but valued for their diversity. We have to start to look at diversity as a valuable commodity that we bring to the table and act accordingly. A report by the Center for Talent Innovation calls black women “invisible leaders.â€Â Even though African American women may be ready for leadership roles, their contributions are being unrecognized. We have to stand up for the personal and professional experience we bring to the table.

What message would you like to share in terms of creating personal and professional well-being?
I see networking as an opportunity to grow your individual wealth and attain professional success. That’s what NAPW is about. I have used networking at every aspect in my career, from getting into law school to working in TV news and becoming a talk show host to writing books [and] now running a public company. It’s also important to bring something to the table other than an appetite. What do you have to offer the people you are reaching out to that is of tangible value to them?