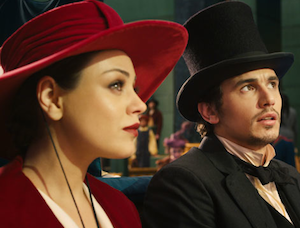 Disney had quite the weekend: Oz the Great and Powerful made $80.3 million in North America and $150 million internationally. The film made $69.9 million in foreign markets.

TheÂ Sam Raimi-directedÂ 3DÂ fantasy-adventure cost Disney $300 million, and analysts say Disney is hoping to make the prequel to the Wizard of Oz into a franchise.

Starring James Franco, Oz tells the story of how a circus worker became the Wizard. Its opening was the third best March opening behind Alice and Wonderland and The Hunger Games.

Dead Man Down, the romantic thriller starring Terence Howard, came in at No. 4, making just $5.5 million.