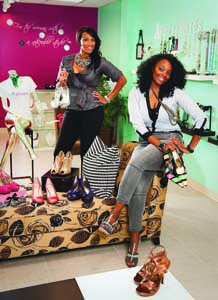 Toni Hall always had a hard time finding shoes. At 5 feet 6 inches and wearing size 12 footwear, the Washington, D.C., native would often have to go out of her way to find shoes that fit. “I know that this is a struggle for me, and probably for many other women out there,â€ Hall recalls thinking. “So, I just had this idea that if I had a shop that catered exclusively to us it would be a relief from the normal retail atmosphere.â€

However, she didn’t have the money for what she really wanted–to open a retail location at a shopping mall. So Hall, now 28, rented out the front office of an interior design studio in Gaithersburg, Maryland, in April 2010. While the 400-square-foot space may have been affordable, it was a warehouse/office space within an industrial complex that attracted little foot traffic. Customers had no way of finding the store because Hall had virtually no money available for marketing. “It was a good start because even though that wasn’t the ideal space for us because no one knew where we were, we were able to make a lot of connections just by having the idea in place,â€ says Hall.

Among those connections was the WNBA. “They had a Media Day photo shoot and we were invited to provide all the shoes for the shoot, so that gave us a foot in the door, no pun intended,â€ says Hall. “We were able to get in and show off our shoes with these athletic women who are part of our target market.â€ That exposure caught the attention of the landlord for Lakeforest Mall, which is about 10 minutes away from the office/warehouse complex. Turns out, the landlord’s wife wears a size 10.

That landlord put her in touch with a leasing agent, who in turn recommended that she partner with another tenant to offset some of the rent. She approached one tenant that seemed to be a good fit–a bra store for women who are generously endowed. “He had a huge space in the mall and he wasn’t using it all. In exchange for me using his store, I wouldn’t have to pay him [rent] but I would just have to act as a bra fitter when I was there at the store.â€ Things were starting to hum. Until the bra store went out of business, leaving Size 12 without a home.

Hall was frustrated. “I didn’t know what to do. I was just going to give up,â€ but instead she reached out to Natalie Prather, her best friend since both attended Magruder High School in Rockville. Hall hoped two heads could solve the problem. They contacted the leasing agent again and worked out a deal: Size 12 would operate out of an 800-square-foot unit under a temporary lease for a modest $1,000 per month.

Taking a Stand Against Tobacco