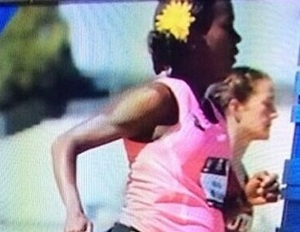 According to Today, Olympian Alysia Montano ran a race while eight months pregnant. She finished dead last but was first in the hearts of many people who were impressed withÂ  her feat.

Montano ran the 800-meter race at the U.S. Championships just six weeks away from her due date. The five-time U.S. outdoor champion, clocked 2 minutes, 32.13 seconds to finish last in her eight-woman preliminary heat, 24.38 seconds behind her closest competitor.

“I’ve been running through my entire pregnancy, and I felt really, really good during the whole process,â€ Montano said after the race in Sacramento, California.

The runner was cleared to run the race by her doctor.