Donâ€™t Bow Down to the Office Bully - Black Enterprise 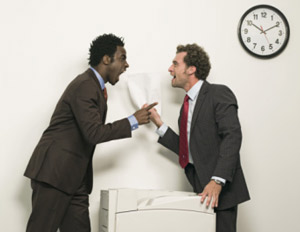 My friend, Kelly Abel, is one of those people you would hire to do anything. Why? Because she will not take on something she’s not going to succeed at and she’ll do anything (within reason) to win. It’s this quality that got her hired to manage a New York fitness center–even though she’d never done it before.

Her new job was a potential nightmare. She inherited a demanding clientele, a downtrodden staff, a history of sub-par sales, and a facility in sore need of an upgrade. But Kelly was up for it. Always one to relish a challenge, she was even excited.

Wildly competitive and energetic (and that’s putting it mildly), she worked around the clock with no regard for weekends or holidays, pitching in on everything from sales to cleaning the toilets when a housekeeper quit. Within eight weeks, a physical renovation of the club was underway and a cultural revolution had begun. Clients began popping into her office to compliment her on noted improvements. Her staff’s spirits were rebooted–a trainer even sent her flowers and a note saying she’d changed her life. Corporate was thrilled; the company president himself emailed kudos.

But not everybody was a fan.

Kelly’s regional sales manager couldn’t stand her and made no bones about it. She complained every time she made her rounds at Kelly’s gym, blaming Kelly directly for not meeting monthly sales goals. She and Kelly disagreed about strategy and she refused to give Kelly the support needed to try new things. She publically criticized her in management meetings and, in private, she stood over Kelly, yelled at her, fingers in her face, often reprimanding her in ways that felt more personal than professional.

“She spoke to me like nobody has ever spoken to me,â€ an outraged Kelly told me after a recent run-in. “My mother, my father, my best friends, even people who I know don’t like me have never talked to me like that. Is she crazy?â€

Maybe she is. Or maybe she’s just one of the thousands of bullies wreaking havoc in the workplace. Google “bullying at workâ€ and you’ll get a whopping 33,700,000 results. It occurs in every country in the world and has sparked the proposal of Healthy Workplace bills in 18 states in the U.S.

On-the-job hazing, hostile criticism, sabotage, and outright threats are on the rise, according to a recent study by the Workplace Bullying Institute. (Just the fact that there is a Workplace Bullying Institute is evidence enough that the problem is significant.) Managers and bosses are the worst culprits, although lateral peers do their fair share, often driven by insecurity or an unhealthy competitive streak.