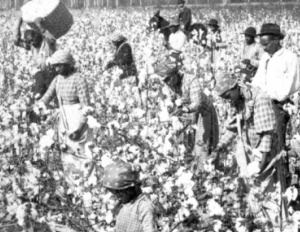 January 23, 2012 will mark the 35th anniversary of the airing of the landmark television miniseries Roots. Broadcast on ABC for eight consecutive nights in 1977, the Roots miniseries was based on the late Alex Haley‘s novel, Roots: The Saga of An American Family. The series introduced LeVar Burton in the role of Kunta Kinte, Haley’s maternal fourth great-grandfather.Â

The production featured a literal who’s who of great American actors, including a now legendary cast of African Americans such as Louis Gossett Jr., John Amos, Ben Vereen, Cicely Tyson and Leslie Uggams, not to mention the unforgettable debut of Burton as Kunte Kinte, captured in Gambia and sold into the American slave trade in 1765 at the age of 15. With a score composed by Quincy Jones and Gerald Fried, Roots captured America’s undivided attention in a way few television shows have done before or since, garnering 36 Emmy Award nominations (winning nine), as well as Golden Globe and Peabody Awards. The finale of the Roots miniseries remains the third highest-rated U.S. television program ever. A sequel, Roots: The Next Generations, was broadcast in 1979, and a second sequel, Roots: The Gift, was produced as a Christmas movie which starred Burton and Gossett.

Fittingly, in honor of Martin Luther King Day, Oprah Winfrey will host a reunion of the cast members who played some of the most unforgettable roles in the Roots miniseries on the Oprah Winfrey Network, Monday, January 16, at 8pm EST. While the miniseries’ place in American television history is firmly established, the story of Kunte Kinte and his descendants had a far deeper and lasting significance for me, helping to determine my outlook on life, choices and values as an African American.

I was 16 years old when my mother informed me and my three younger siblings (ages 15, 13 and 9), that for the first time in our lives, not only would we be allowed to stay up past our bed time for the week (including school nights!), but that we were required to. As a young, divorced single mother struggling on public assistance to help make a dollar out of 15 cents while raising us on her own, she’d long established her word as law, to be violated at risk of our lives. (You know the type: “I brought you into this world, and I’ll… “) Mommy said we had to watch Roots. Over the ensuing eight nights, I would be mesmerized by what I saw on our television screen.

First of all, I don’t recall ever seeing more black people on television at one time (excluding news coverage of events such as civil rights marches and racial unrest after the assassination of Rev. Martin Luther King Jr.) before the eight nights that Roots aired. At that point, the main way to see black people on television was by watching sitcoms such as Good Times and Sanford and Son. I still remember it being a big deal when a black person (nearly always an entertainer or athlete) was set to appear on a TV show; my mother would call all of her black friends and neighbors, who would call all of their black friends and neighbors, to ensure that the entire black community tuned in. (Back in those days, black guests performed on late night talk shows, but were almost never invited to the couch to be interviewed by the host.) Seeing all of the great actors and actresses we loved, admired and crushed on was an astonishing source of pride to black people. It’s worth noting that many of the black cast of the Roots miniseries, including Academy Award winner Gossett (Best Supporting Actor, An Officer and A Gentleman) and Academy Award nominee Tyson (Best Actress, Sounder), have gone on to establish themselves among some of the world’s greatest actors.

But the real impact of the Roots miniseries is that it sparked a hunger in me to discover who I really was as a Black American. Before Roots, I thought the African American story began at slavery. Period. In fact, my total knowledge of what it meant to be Black prior to watching Roots consisted of the following: My ancestors were slaves. President Lincoln set us free. Rev. Martin Luther King Jr., with an assist from Rosa Parks, convinced white people of good will to end racial discrimination (at least against “responsible Negroes”). Dr. King was good. Malcolm X–the absolute furthest thing from a responsible Negro–was bad–very bad. And I could grow up to be anything that I wanted to be, even President of the United States of America. Except I could always tell that the people saying this to me, whether black or white, didn’t really believe it themselves. (Interestingly, my mother, who has never expressed anything but unshakeable, matter-of-fact faith in my abilities, never told me I could be the President or anything else she didn’t truly believe herself.)

So having Kunte Kinte and millions like him presented to me as evidence that the story of my ancestry and identity began long before American slavery was a powerful, even shocking, revelation to me. I immediately saw myself differently when I looked into the mirror each day. And it wasn’t just me; when I went to my high school classes each day, I could immediately tell which of my white high school classmates and teachers had also been watching Roots by the way they looked at me. It was as if they were thinking: “Now, Alfred knows. And now, I know. And he knows that I know.” I don’t recall any negativity coming out of it. (My hometown of Long Branch, N.J., had only one high school, so my public school education was very much integrated, though racial conflict was not uncommon.) But everything was unmistakably, irreversibly different. Roots provided the first opportunity for me and my black friends to take cultural pride in who we were, and for some of my white friends to have a deeper appreciation for who I was and how I felt as a black person, even if they couldn’t personally understand or identify with it. I learned that being honest about America’s painful racial history did not have to divide people against each other; in at least a few cases, it helped to increase the respect and deepen the friendships of my white peers.

The bottom line: Roots breathed credibility into the idea that I could, indeed, do and be anything I wanted to. The belief that I was inferior to absolutely no one, white or otherwise, in the eyes of God was seared into my soul by one pivotal scene, where the adult Kunte Kinte (played by Amos) raises his infant daughter Kizzy to the star-spangled heavens and loudly declares: “Behold, the only thing greater than yourself!”

Eighteen months after the Roots miniseries aired, I went away from my hometown for the first time in my life when I started college at Rutgers University, a couple of hours away in New Brunswick, N.J. The appetite for understanding and appreciating black culture and history sparked by Roots became ravenous after my discovery of the great Paul Robeson (widely considered to be Rutgers greatest alumni ever) during my freshman year. I ended up becoming a leader in the Black student movement at Rutgers and the editor-in-chief of the Black Voice/Carta Boricua, a university-wide publication of Black and Latino students. And so began my calling to a career in media as a means of championing the truth, power, beauty and potential of who we are and can choose to be as African Americans. I fell in love with the power of story telling to open eyes and change lives. And to think I owe it all to Roots. Our Roots.

If you want a suggestion from me of how you should spend the Martin Luther King Holiday, or what you should do during Black History Month, how about buying the Roots miniseries on DVD and insisting that the children in your family, church and community sit down to watch and discuss it with you. Even if they have to stay up late on a school night.

Happy 35th Anniversary to Roots. And thank you to each and every person who played a role in bringing the story of Kunte Kinte to life.