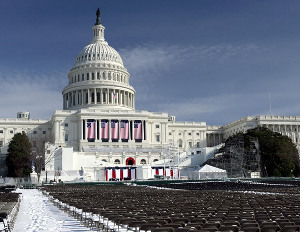 President Barack Obama’s inauguration in January 2009 drew the largest attendance of any event in the history of Washington, D.C. His second inauguration, a scaled back event, with official estimates of less than half the 1.8 million people whom gathered four years ago. While a scaled-back inauguration is standard for second-term president’s, this also means less revenue will be spent in D.C. small businesses.

Richard Kane, CEO of International Limousine Service based in Washington, D.C., recalled Obama’s first inauguration. In 2009, transportation was at a premium, his company rented an additional 70 SUVs and Sedans to take care of clients. This year he only rented an extra 30.

“When the inauguration comes in it’s a very good source of revenue and supports our first quarter, just maybe not as much as it did four years ago,â€ said Kane.

Even though the turnout is not expected to be anywhere near the level of four years ago, experts put the inauguration “on parâ€ with Christmas in terms of sales.

“We are expecting about 800,000 to come to Washington for the event and this will be the fourth largest inauguration and we are excited for our small business community because it has a direct impact on tourism and all the other related industries which is where many small businesses are in this area,â€ said Bridget Bean, district director at the Small Business Administration for the Washington, D.C. Metro Area. “Small businesses have been preparing for months for this.â€

For Sloane Stephens, Playing Serena Williams Is a Golden Opportunity Down Under