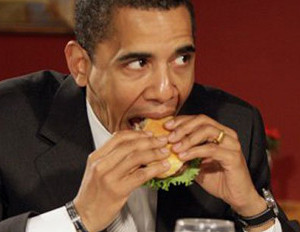 Burger lovers received sad new this week when it was announced that the chain, Ray’s Hell-Burger and its sister restaurant Ray’s Hell Burger-Too, are closing their doors due to a landlord dispute. Both locations, which were frequented by President Obama and Vice President Joe Biden are not expected to reopen.

Customers assumed the closing was temporary, due to a sign posted on Hell-Burger’s door that directed patrons to a third location across the street. But recently, “for rent ” signs have been spotted in the windows of both locations, and the real estate company responsible for both locations has confirmed that the storefronts are available for lease.

President Obama dined in Ray’s Hell-Burger with Vice President Biden in 2009 as well as in 2010 with Russian President Dmitry Medvedev, according to the Huffington Post. Both visits boosted sales and popularity for the restaurant.

Chef Michael Landrum says patrons will still be able to enjoy Ray’s signature menu, including a foie gras topped burger at their third location, Ray’s to the Third.