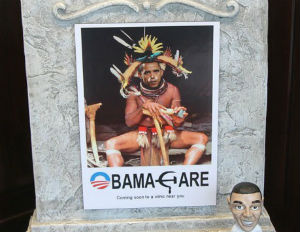 Bill Skuby, a New Jersey man who placed a doctored photo of President Obama dressed as a witch doctor in the window of his shop, didn’t quite understand the furor that his poster caused.

“It always comes down to the race card,” Skuby, 66, told NJ.com of the backlash he’s received.

The witch doctor picture shows President Obama naked except for a headdress and loincloth, with a bone through his nose.

“If this is racism, then it’s reverse racism,” Skuby told the Asbury Park Press. “I think they’re as racist as they accuse me of being,” he said.

The anti-Obama sign, which also reads “Obama-Care” with a hammer and sickle logo, a reference to communism, is a criticism of the president’s health care plan.

Read the full story at the Daily News

Lost Time, Lost Money: 4 Ways You Tend to Waste Both in the Workplace