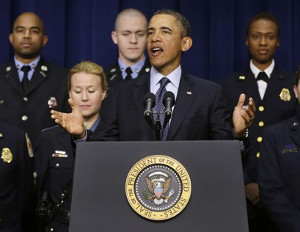 President Obama on Friday urged Congress to pass a new student loan bill that would prevent what is said to be a doubling of government-subsidized loans for a generation of current and former student borrowers.

Obama, speaking in the Rose Garden flanked by students — a device the White House uses frequently, engaging the audience it is intended to impact — said that the failure to lock in an affordable rate for students next year “eliminates safeguards for low-income families.”

Both the president and the First Lady have injected their personal stories into the overall narrative of the student loan crisis, at one time or another mentioning that they only recently finished paying their student loans. Each attended law school.

“The House bill isn’t smart, and it’s not fair,” Obama said. “So I’m asking young people to make their voices heard once again.”

“We cannot price the middle class out of a college education. We can’t keep saddling young people with more and more debt just as they’re starting out in life.”

The White House on Friday, repeated its stance that the proposal needed major tweaking to meet the president’s satisfaction.

“While we welcome that House Republicans have paid some attention to this issue this year, their proposal, unfortunately, does not meet the test,” White House Press Secretary Jay Carney said.