Louisiana Woman Set On Fire By KKK Over Supporting Obama? 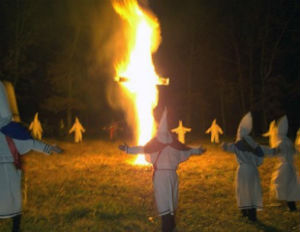 Louisiana police are investigating what appears to be a hate crime.

The Daily Mail reports that Sunday evening, 20 year-old Sharmeka Moffitt of Winnsboro, Louisiana was exercising on a trail in a city park when she was attacked by three men in white hoodies. The men doused her in a flammable liquid and set her on fire. She called 911 and extinguished the fire with a spigot before the paramedics arrived.

Moffett was taken to the hospital in Shreveport, Louisiana where she is now in critical condition with burns over 60 percent of her body.

Though social media sites like Facebook and Twitter are reporting that the family says that this was a hate crime and that the Ku Klux Klan was involved, the Franklin Parish Sheriff’s office says the reports that she was wearing an Obama t-shirt and that’s why she was attacked are false. However, authorities are confirming that the letters “KKK” were painted on the hood of her car, along with a racial slur.