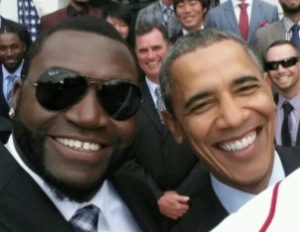 During his visit to the White House April 1 to present President Obama with a personalized Red Sox jersey, World Series MVP David Ortiz quickly took out his phone, a Samsung Galaxy Note 3, and took a selfie with the leader of the free world.

This is the second high-profile selfie attributed to the Korean smartphone company, which orchestrated a celebrity-packed selfie at the Oscars thanks to Ellen Degeneres.

That particular shot is now the most retweeted selfie in Twitter history.

In an interview with Boston Globe, Ortiz claimed that no money was exchanged between himself and Samsung for the tweet. “That was one of those things that just happened,â€ Ortiz said. “I gave him the jersey…and I thought, really at the last second, maybe I should snap a shot with my phone while I have the chance…it had nothing to do with no deals.â€

What an honor! Thanks for the #selfie, @BarackObama pic.twitter.com/y5Ww74sEID

But while Ortiz claims there was no deal, Samsung told the Boston Globe it signed a promotional deal with the Red Sox MVP to coincide with his visit to the White House.

@DavidOrtiz w/ his @DunkinBoston coffee before the @RedSox home opener has a nice RING to it! ^SC pic.twitter.com/5eXx9N1oba

The promotional selfie may have even prompted the White House to ban the photos altogether, according to White House senior adviser Dan Pfeiffer.

It isn’t the first selfie about which the president’s gotten some press. During the memorial service of Nelson Mandela, Obama took a selfie with Helle Thorning-Schmidt, Prime Minister of Denmark.

NFL Invests in Teaching and Educating Athletes on Entrepreneurship