Obama Lays Wreath at Tomb of the Unknowns - Black Enterprise 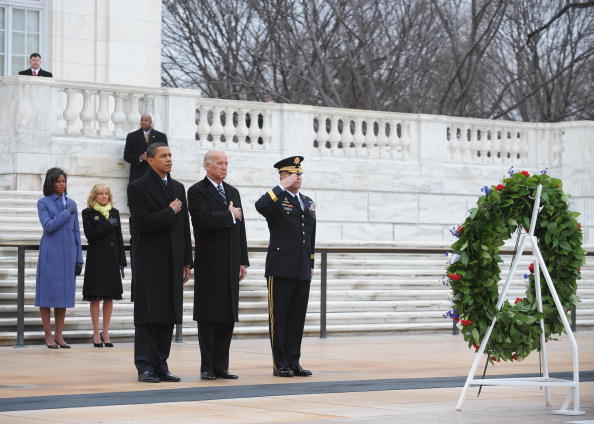 President-elect Barack Obama and Vice President-elect Joe Biden and their wives pay their respects after laying a wreath at the Tomb of the Unknown Soldiers at the Arlington National Cemetery in Virginia. (Source: Getty Images)

President-elect Barack Obama and Vice President-elect Joe Biden started their day with a ceremony at Arlington National Cemetery Sunday to lay a wreath at the Tomb of the Unknown Soldier.

Maj. Gen. Richard Rowe, commander of the Military District of Washington, and his wife, Dale, greeted the Obamas and the Bidens outside the cemetery’s amphitheater. They then went into the amphitheater and emerged on the other side, descending the stairs to the tomb.

Obama and Biden, dressed in long black coats, hung the wreath before the tomb and then held their hands over their hearts as Taps was played.

After another brief time in the amphitheater, the Obamas and Bidens emerged and chatted for a while with the Rowes.

After the brief ceremony, they drove away in the motorcade — the Obamas rode in the new presidential armored Cadillac with the blue license plate reading “44.”

As they proceeded to the historic burial ground, the streets near Blair House, where the Obamas are staying until they moves into the White House on Tuesday, and near cemetery were lined with waving, cheering supporters.