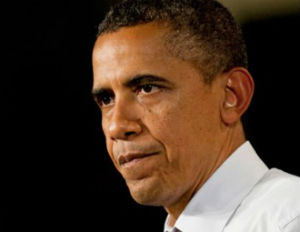 President Barack Obama has publicly denounced claims made by Republicans that his administration has “gutted” work requirements for welfare benefits.

At a campaign event on Wednesday, the president addressed the accusation which surrounds his welfare waiver policy. In attack ads, the Romney campaign has used the policy to hammer down the notion that the president has eliminated work requirements for welfare recipients. Such claims have been repeatedly made by Republican officials, including in speeches addressed at the Republican National Convention.

“I mean, somebody was challenging one of their ads — they made it up — about work and welfare. And every outlet said, this is just not true. And they were asked about it and they said — one of their campaign people said, we won’t have the fact-checkers dictate our campaign,” Obama said. “We will not let the truth get in the way.”

Obama was referencing comments made by Romney pollster Neil Newhouse to ABC News. The president went a step further earlier this week to address Republican presidential candidate Mitt Romney directly during an appearance at the White House Briefing Room.

“Everybody who’s looked at this says what Gov. Romney’s saying is absolutely wrong,” Obama said. “They can run the campaign that they want, but the truth of the matter is you can’t just make stuff up.”

Before Expected Release of New Gen iPhone, Cash In Your iPhone 4S