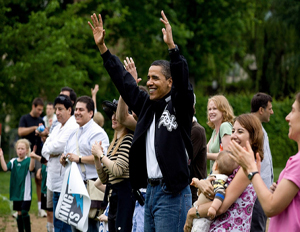 Move over, Biebs. Obama has added another notch to his presidential belt, becoming the most influential person online.

Klout announced on Tuesday that it was tweaking the algorithm behind the scores it assigns to each social media user. The San Francisco-based company replaced its 1 to 100 scale with a 400 metrics rating system. The change analyzes 12 billion bits of data every day from social networking sites including Facebook, Google+ and Tumblr, up from 1 billion just months ago, according to Reuters. Many users can expect to see a bump in their Klout score due to the change.

As a result of the new algorithm, Justin Beiber’s rating slipped from 100 to 92, while the president’s score jumped from 94 to 99.

The Harsh Reality Of Single Black Women And Bankruptcy