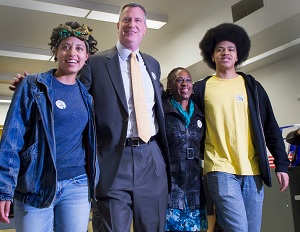 With summer time quickly approaching and the school year coming to a close, now is the perfect time for youth to seek summer employment opportunities.

Thanks to the efforts of New York Mayor Bill de Blasio and his wife, Chirlane McCrary, more NYC youth will have an opportunity to do just that. The two leaders have managed to collect $3.2 million in private donations to fund the development of the Center for Youth Employment, in hopes to offer more local teens and young adults with employment options.

In the next five years, the mayor’s goal is to provide 100,000 young New Yorkers between the ages of 14 and 24 with internships, mentorships and summer jobs that can lead to a brighter future for employment. According to the Wall Street Journal, by 2020 the center wants to create “universal access” to summer employment for all city youth, including those in shelter and foster care.

With the city’s new Center for Youth Employment, the mayor and his wife have encouraged city businesses to become involved and a part of the movement. In the past, 30 percent of youth employment came from businesses with the rest coming from the government and nonprofits. So far, big corporations such as Citi Bank and Macy’s have shown their support by offering $100,000 each to the program.

[RECAP] Panel Discussion On Law Enforcement and the Community