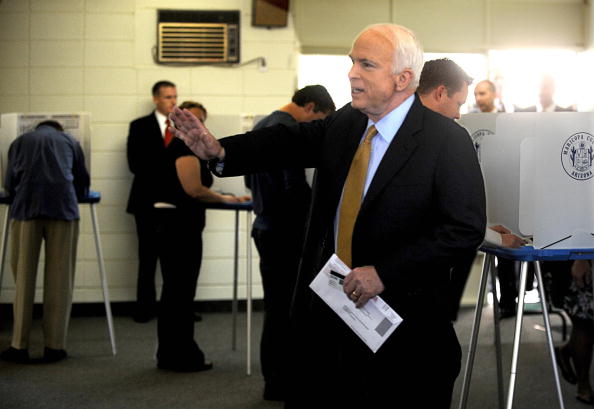 The lawn in front of the Upper Merion Baptist Church is riddled with signs promoting a McCain-Palin administration. Â At noon today, 730 voters had already passed through the entranceway of the church to cast their votes for the next president.Â

Huddled near the main entrance of the building were supporters for both Sen. Barack Obama and Sen. John McCain.Â

As voters walked by, Republican and Democratic volunteers rushed to give them brochures, handbills and fliers to sway anyone who might have still been undecided.Â Located in a suburban middle-class neighborhood, the church was frequented by a majority of white voters.Â Though there were only a few Obama-Biden signs, that didn’t stop David Landsman and his wife Ruth from promoting the Democratic senators for president and vice president.

“I think a lot of people saw what John McCain did with Sarah Palin and didn’t like how the decision was made and don’t like a lot of things Palin stands for,â€ he said.

He admits the further you get away from Philadelphia, the more difficult is to attract Obama supporters in rural areas of Pennsylvania.

In Upper Merion Township, the historical significance surrounding this year’s presidential election goes beyond the possibility of a woman vice president or an African-American president in the White House.

This year was the first year the area’s school district closed for Election Day. Though many children were too young to vote, some tagged along to see how their parents voted.

“It’s less of the fact that he’s black, as to what it is he brings to the table,â€ Landsman said. “He doesn’t have the experience McCain has, but in my mind he’s got more leadership qualities.â€

Wearing a Vietnam Vet hat adorned with pins and a shirt that read, “Veterans for McCain,â€ Santillo said McCain doesn’t have everything it takes to be president but enough to win his vote.

“If he were perfect, he wouldn’t be here.â€ Santillo said.

Ruth Landsman said the issue of comparing McCain’s experience with Obama’s is irrelevant.