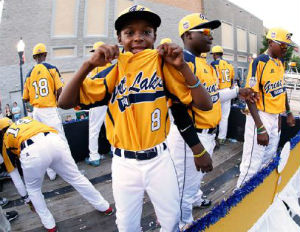 Jackie Robinson West was all the youth baseball rave in 2014, winning the coveted title as U.S. champions in the Little League World Series. The win earned the South Side Chicago pre-teens and teenagers a visit in November to the White House where they were congratulated by President Barack Obama and first lady Michelle Obama.

But Wednesday, Little League International Inc., released a statement announcing that the team will be stripped of its title because it used a falsified boundary map, according to NPR.

“This is a heartbreaking decision. What these players accomplished on the field and the memories and lessons they have learned during the Little League World Series tournament is something the kids can be proud of, but it is unfortunate that the actions of adults have led to this outcome,” Stephen D. Keener, Little League International president and CEO, said in the statement.

According to the statement, the team’s manager has been suspended and an administrator has been terminated.

Attempts to reach the Jackie Robinson West team have thus far failed, so why or how this may have happened is unknown. DNAinfo,Â a Chicago-based news site, reports that “Jackie Robinson West officials secretly expanded the league’s boundaries to grab star players, encroaching on territories belonging to neighboring South Side leagues.”

League personnel, managers, and coaches are to be volunteers, according to Little League rules. However, Little League is big business. According to USA Today, 2012 revenues for Little League Inc. totaled nearly $25 million. USA Today also reports that Kenner, the League’s CEO, earns $430,000.

ESPN reports that Jackie Robinson West would have been the third all-African American team to win the championship.