No College Degree? Your State May Be Eager to Help 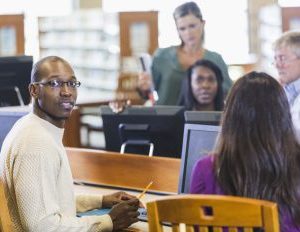 Continuing education: adult students in the library studying on computers. Focus is on the young African American man (late 20s) wearing eyeglasses, looking at the camera.

I recently interviewed Jessica Brown, author of How to Pay for College When You’re Broke and also a BLACK ENTERPRISE contributing writer. You can read the post I developed from our interview here. In it, Brown mentions an exciting program for eligible seniors (those 62 and older) in Georgia, which allows residents to earn a college degree at no cost.

Now it looks as if Tennessee and other states may be getting in on a similar act, but without the age requirement.

Tennessee Reconnect is an initiative with the goal to re-enroll college dropouts, and encourage them to get their degrees, reports the Wall Street Journal. The program provides counseling and financial aid to those who’ve dropped out, after earning more than half the credits they needed to graduate.

Other states, including Mississippi, Iowa, North Dakota, South Dakota, Indiana, and cities like Louisville, Kentucky, are offering similar programs in an effort to increase their college graduates and improve local economies.

These programs do not target black people specifically, but interested black residents in these areas can and should sign up for them.

Working Without a Degree

According to the Georgetown University Center on Education and the Workforce, about 37 million adults in the U.S. are working with some college credits under their belt, but without having earned an associate or bachelor’s, the Wall Street Journal reports.

However, those who lack degrees tend to feel insecure about their future, especially if most of their peers on the job already hold them. States want to attract high-paying employers by having a well-educated, high-skilled workforce–which tends to raise median wages for an entire area, even of those who don’t have degrees, according to a 2013 report by the Economic Policy Institute.

Check to see what your state is doing about urging college dropouts to return to school. You may be very glad you did.

4 Trends Staffing Firms Should Look Out for in 2017