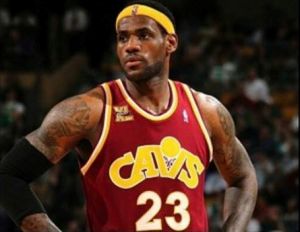 Nike simply couldn’t afford to turn their backs on the reigning MVP.

The high-stakes moneybags battle between Nike and Under Amour for the league’s top scorer ended Sunday when the swoosh matched Under Amour’s gigantic offer for OKC‘s Kevin Durant.

Nike exercised its contractual obligation and matched Under Amour’s offer for KD which sources say was somewhere in the vicinity between $265 million and $285 million.

So in the end Nike gets to keep their man with an endorsement deal for the ages. “The overall value of Durant’s deal with Nike could hit $300 million or more if his business continues to rise. That number is flexible as he will get a royalty on all sales in his line,” ESPN reports.

The deal reportedly runs through 2024. The famously low-key Durant says he is “excited and humbled” to re-sign. LeBron James was a tad more effusive, welcoming KD back to the Nike stable with this tweet, “Happy to have the homie @KDTrey5 stayin with the @Nike @nikebasketball family! Congrats my brother! Like Dj Khalid would say “We The Best”!!.”

But it got us thinking. Who’s got the best-selling shoes in the game? A few names come to mind: LeBron Raymone James, a certain Black Mamba also known as Kobe Bryant, maybe Melo man, Carmelo Anthony. We could even throw in the high-flying Blake Griffin.

According to reports, last year, James saw his shoes retail at a whopping $300 million in the United States.

Durant comes in second racking up $175 million in U.S. shoe sales. Kobe came in a distant third with $50 million in sales, but their sales all pale in comparison to the man many believe to be the G.O.A.T.