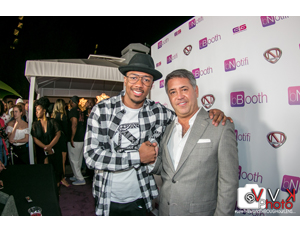 BBooth is an entertainment technology company. It is providing innovative ways for companies to distribute content and activate brands and for artists to promote their creations and engage with fans.

One of bBooth’s solutions is bNotofi. This push-to-screen solution allows companies, entrepreneurs, and artists to send out a message to contacts. The message is delivered by an actual person who appears to step from the screen of the recipient’s device and speak directly to the recipient.

You can see an example of how bNotifi works in the below video:

BBooth Kiosks is another innovation from the company. This is a life-sized, smartphone screen that serves as an interactive kiosk.

The kiosk is made up of a life-sized, interactive display. It features an integrated HD camera that records high-quality video and stills. Companies can apply custom branding to a kiosk. And by the way, it also can function as a karaoke platform–supporting a microphone and on-screen lyrics.

With the bBooth Go app, users can record their performances, testimonials, or auditions up to a full 4.5 minutes of recording time and share across their social channels.

At a party announcing his ambassadorship, the entertainer said, “bBooth’s technology has enormous potential and I’m very excited to work with Rory and his team to introduce it to the world,â€ according to a statement released by bBooth.

“Nick Cannon is that rare combination of artist and entrepreneur, extremely talented and successful at both, a true Renaissance man,â€ says Rory Cutaia, CEO at bBooth. “We’re thrilled to have him on our team at bBooth, building value for our clients and shareholders.â€

Cannon produced ‘Flags’, his July spoken word drop on Facebook using bNotifi. He released his video on theÂ Fourth of July weekend, as part of his #SpokenSundays series.

Resume Revamp: The One Thing You’re Doing Wrong on Your Resume