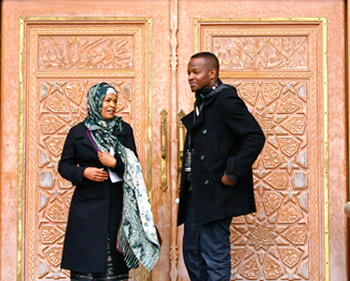 Long and Basir between takes (Press)

Throughout much of her career, Nia Long has often played the romantic lead. She’s traded poetic verses with Larenz Tate in Love Jones (1997), flirted with Taye Diggs in The Best Man (1999), and started a surrogate family with Ice Cube in Are We There Yet? (2005). This Friday (2/11), however, moviegoers will see her in a dramatically different role, as she co-stars as a Muslim mother in writer/director Qasim “Qâ€ Basir‘s independent film Mooz-Lum .

“As an artist, you don’t want to keep painting the same picture,â€ says Long. “I think each canvas should be painted with a different picture and I was really driven and attracted to the role because it was such a different role for me. Not only am I playing a Muslim woman, but it’s also more of a dramatic piece, and those roles are far and few between for [Black actors].â€

Also starring Evan Ross, Danny Glover and Roger Guenveur Smith, Mooz-Lum tells the story of Tariq (Ross), a young Muslim-American man torn between adhering to the strict beliefs of his father (Smith) and following his own path in life. Long plays Tariq’s mother, Safiyah, who struggles to keep the peace between father and son, while the world around them comes crumbling down in the wake of the 9/11 attacks. The veteran actress delivers a superb dramatic performance that portrays Muslim women in a light rarely seen on screen.

“There’s a misconception that Muslim women are passive, docile and not assertive, and I found that to be quite the opposite,â€ says Long, who spent time with the women in Basir’s family to prepare for the part. “The role was written as a strong Muslim woman and that’s what I wanted to do, I wanted to be true and honest to who these women are because they’re beautiful women and I don’t think there’s been a film where they’ve been represented–at least not as an African American Muslim family. So for me that was probably the most important thing; to be true and honest to what I saw and what my experience has been with these women.â€

Distributed through Peace Films and AMC Theatres, Mooz-lum took home Best Narrative Feature honors at this year’s Urbanworld Film Festival and early reviews have been positive. The film opens in limited release in 10 cities this weekend, but a strong showing at the box office can result in more AMC Theatres screening the project in the coming weeks. That’s something Long hopes happens because of the movie’s strong message.

“To be quite honest, even though the film is about a Muslim American family, this film could be about a Christian family, a Buddhist family,â€ says Long, who plans to use the film as a tutorial for her own 10-year-old son. “The thing that makes it very relevant is 9/11 and what we’ve been through as a country. So it’s timely but there’s also a tremendous amount of the story that’s just universal to a coming of age story and a family that’s going through struggles just like any other family. What’s so great about a movie like this is that not only are you entertaining people and telling a great story, but you’re also educating them.â€

For more related coverage, be sure to read… 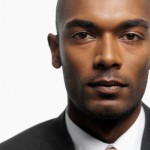 10 Power Moves to Help You Better Manage Your Money