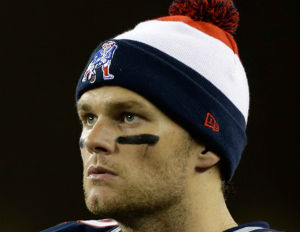 The NFL league office has weighed in on the evidence presented against the Patriots and “Deflategateâ€, and the response is stern, if not harsh.

Ted Wells, the attorney that the league hired to investigate suspicions that the New England Patriots were undermining league rules, noted in a 243 page report made public last week that –

In response, the NFL has suspended New England quarterback Tom Brady for the first four games of the 2015 season, in addition to docking the Patriots a 2016 first round draft pick, a 2017 fourth round pick, and fining the organization $1 million. The Patriots staffers that carried out the deflating of the game balls have been suspended indefinitely. Further explaining the league’s ruling, NFL commissioner Roger Goodell said in a statement “We reached these decisions after extensive discussion with Troy Vincent [NFL executive vice president of football operations] and many others… we relied on the critical importance of protecting the integrity of the game and the thoroughness and independence of the Wells report.â€

Four-time Super Bowl winner Tom Brady, who has remained relatively silent since the reports finding were announced, is implicated directly in the report which contributes to his direct suspension. During the initial investigation, Brady’s refusal to surrender phone records were viewed as inhibitory to the process by Wells, and in a letter Vincent wrote to Brady, “Your actions as set forth in the report clearly constitute conduct detrimental to the integrity of and public confidence in the game of professional football. Each player, no matter how accomplished and otherwise respected, has an obligation to comply with the rules and must be held accountable for his actions when those rules are violated and the public’s confidence in the game is called into question.â€

In response to news of the punishment, Brady’s agent Don Yee, has stated that Brady will appeal the NFL’s decision, and said in a statement “The discipline is ridiculous and has no legitimate basis. The NFL has a well-documented history of making poor disciplinary decisions that often are overturned when truly independent and neutral judges or arbitrators preside…Sadly, today’s decision diminishes the NFL as it tells its fans, players and coaches that the games on the field don’t count as much as the games played on Park Avenue.â€

“Despite our conviction that there was no tampering with footballs, it was our intention to accept any discipline levied by the league. Today’s punishment, however, far exceeded any reasonable expectation. It was based completely on circumstantial rather than hard or conclusive evidence.

“Tom Brady has our unconditional support. Our belief in him has not wavered.â€

In his letter to the Patriots, Troy Vincent also noted that the evidence in the report suggested that this incident was not the first time something like this has occurred. In 2007, the Patriots were again under fire for a incident referred to as “Spygateâ€ in which they were found to have taped opposing teams coaches to figure out their play signals. At that time, the league fined the team $500,000 and a first round pick, as well fining Coach Bill Belichick $250,000.

Check out some of the responses on Twitter from current and former players below.

The Patriots are habitual rule breakers, and that's why they win championships.

They lose a million dollars, which is nothing to an NFL franchise, and a first round draft pick but they still got a championship haha..

You have to the love the patriots . They do anything to win a Super Bowl . #mytypeofteamðŸ˜Š

T. Brady suspended 4 games for violating integrity of the #NFL. T.Pryor suspended 5 games in NFL for Tattoos while in college. AMAZING!

If the NFL is so worried about the integrity of the game then the league should issue all balls for all games. #DeflateGate #BaseballDoesIt

I honestly feel bad for Tom Brady!! I know first hand the type of competitor he is & how much work he puts in… Came down too hard on him!

To win four Super Bowl is outstanding. I know Tom Brady is a great competitor and leader. I feel sorry for him and patriots nation!

Verizon to Buy AOL for $4.4 Billion