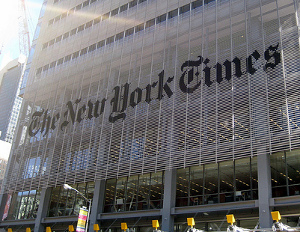 The New York Times yesterday announced a new initiative called timeSpace. This program consists of a four month incubator for early stage media startups and will allow 3 to 5 chosen companies to work out of the company’s headquarters, demo their product and connect with NY Times staff.

The timeSpace program does not require businesses to give up any equity, an unprecedented move for an incubator. The Times says being “in the midst of unprecedented change,â€ as reasoning behind the decision to launch this project.

According to the NY Times website: “Our core purpose remains to enhance society by creating, collecting and distributing high-quality news and information. We want to push ourselves and push others to find the best ways to do so, and we believe that timeSpace can be a part of that process.â€

This isn’t the first time a media company has sought to work with early stage companies. Last year, the BBC launched a mentoring program for digital startups called BBC Labs. The Irish Times had a similar program entitled Digital Challenge that also matched the media company to startup companies.

Interested applicants have until Tuesday, February 19th to apply. Between three and five companies will ultimately be invited to participate. Applicants can apply at http://www.nytimes.com/timespace/

Back to Basics: All You Need to Know About Facebook Lists