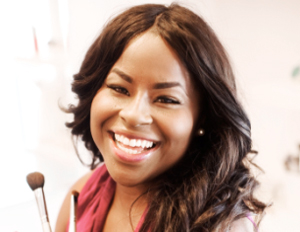 Roxie states that when she does make-up she doesn’t want to mask beauty, but to enhance it. “I want my clients to feel like celebrities because they are. Celebrities are people that are celebrated, whether it’s by 12 people or 12 million.â€

Hairstylist Hadiiya Barbel, who won an Emmy for her work on the Wendy Williams Show, has worked with many celebrities such as Chaka Khan, Tajari P. Henson, Iman, Ciara, Keri Hilson, and many more.

The event is produced by MVC Management Productions and will feature makeup and hairstyling concepts, a runway presentation by up-and-coming fashion designer Luis Peralta, beauty demonstrations and tips on how to transform your hair and makeup to be New York Fashion Week ready.

In 2012, MVC made history as the first all-African American-owned-and -operated producÂ­tion company to present at Mercedes-Benz Fashion Week, in Lincoln Center. MVC Founder Tai Chunn created a landmark event with the debut of a clothing collection from Nina Skarra, a Scandinavian designer he discovered through a Norwegian-based fashion representative.

MVC produces several dozen events each year for a broad base of clients that include professional mixed martial arts fighter Joey Slash, for whom MVC is brokering television, film, and modeling deals and Lamik Beauty, a black-owned cosmetics company MVC is helping to land international distribution of its eco-chic makeup brand in retail outlets such as Sephora.

With the current movement to be ‘green’ and environmentally conscious in all aspects of life, Lamik founder Kim Roxie took it upon herself to create what is known as the first eco-chic cosmetics brand. In 2004 at the age of 21, Roxie launched LAMIK Beauty, a line that features products with all natural ingredients packaged in recyclable container.

“Eco-chic makeup means ecofriendly, glamorous, and natural,â€ explains Roxie, who opened the first LAMIK store in Houston. Because of LAMIK, it is now easier for people to make a healthier choice when it comes to their makeup.

Over $500,000 In Crowdfunding Raised For Ferguson Officer Darren Wilson

7 Ways To Give To Your Favorite Charitable Causes