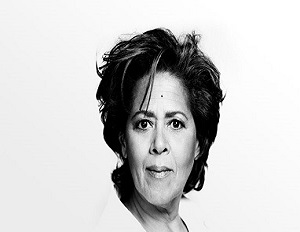 The school-to-prison pipeline dilemma in America is masterly tackled in the play Notes From the FieldÂ , appearing off-Broadway at New York’s Second Stage Theater. Drawn from interviews with over 250 people living and working within a challenged system, Anna Deavere Smith delivers her signature documentary-style, solo performance. She assumes the identities of 19 individuals to depict the personal accounts of students,Â parents, teachers, and administrators.

Investigating a justice system that pushes minors of color out of the classroom and into incarceration, Notes From the FieldÂ shines a light on a very poignant and timely topic. Smith transforms into such characters as the President and Director-Counsel of the NAACP Legal Defense and Educational Fund, Sherrilyn Ifill, who explains how the country made a decision to invest in the prison system at the expense of other programs, such as education, that would decrease the necessity of prison.

The U.S. has less than 5% of the world’s population and more than 20% of the world’s prisoners. Among large nations, America not only has the highest rate of incarceration, but imprisons more people than any other, per the London-based International Centre for Prison Studies.

Smith is a professor and a playwright best known for documentary-style theatrical plays. Her groundbreaking shows have tackled such thorny topics as the riots after the Rodney King beating verdict, in Twilight: Los Angeles, 1992, Â and healthcare and mortality, in Let Me Down Easy. Smith is some 20 years older now than she was then, but her writing style remains confrontational.

“I’m a dramatist, I like moments when there’s something unsettled. I’m in this business of looking at conflict. Conflict is never absent. It’s just that when it gets exposed, more people are concerned about it,” she told the Los Angeles Times.

From Classrooms to Prison Cells

In Notes from the Field, Smith turns a spotlight on how the U.S. educational system fails children and feeds them into the prison system. The term “school-to-prison pipeline” is used to describe the increasing patterns of contact students have with juvenile and adult criminal justice systems, and how mass incarceration and for-profit prisons have grown significantly. This is a result of recent practices implemented by educational institutions, specifically zero tolerance policies and the use of police in schools.

In Notes from the Field, Smith depicts the incidents of the 14-year-old Texas girl in a bathing suit being held to the ground at gunpoint by a police officer and the South Carolina student being thrown across her classroom by a school security officer. There’s also a look at the brutal arrest of Freddie Gray and of the Baltimore riots that followed his death.

An actress as well as a playwright, Smith is widely known for her roles as National Security Advisor Dr. Nancy McNally on The West Wing, and as hospital administrator Gloria Akalitus in the Showtime series Nurse Jackie.

The Worst Money Mistake Youâ€™re Making with Your Business