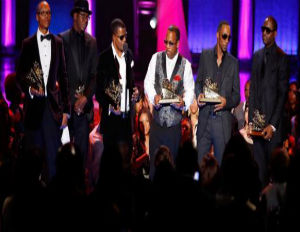 During the finale of this year’sÂ Soul Train Music Awards which aired last night on BET, R&B 80s boy band New Edition was honored with a Lifetime Achievement award.

The ceremony, which was filmed in Las Vegas, was hosted by Cedric the Entertainer—it wasÂ the first time in the 25-year history of the ceremony that it was without its creator, Don Cornelius.

New Edition, the Boston-bred group, made up of Ronnie DeVoe, Bobby Brown, Ricky Bell, Michael Bivins and Ralph Tresvant (and later Johnny Gill), helped define the concept of the “boy band,” paving the way for acts such as N’Sync and New Kids on the Block.

Bobby Brown, who’s had his share of legal troubles lately, delivered an emotional speech thanking his fans and band mates. But he failed to mention his late ex-wife, Whitney Houston. Â Later in the show, the group performed some of their biggest hits including “Candy Girl,” “Mr. Telephone Man” and “If It Isn’t Love.”

Retailers Count on Aspirational Shoppers to Boost Revenue This Season