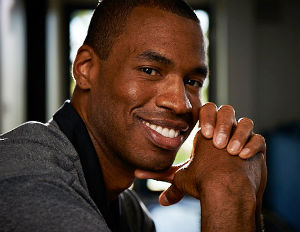 Excerpt From CNNSI of Collins’ piece:

I didn’t set out to be the first openly gay athlete playing in a major American team sport. But since I am, I’m happy to start the conversation. I wish I wasn’t the kid in the classroom raising his hand and saying, “I’m different.” If I had my way, someone else would have already done this. Nobody has, which is why I’m raising my hand.

My journey of self-discovery and self-acknowledgement began in my hometown of Los Angeles and has taken me through two state high school championships, the NCAA Final Four and the Elite Eight, and nine playoffs in 12 NBA seasons.

Now I’m a free agent, literally and figuratively. I’ve reached that enviable state in life in which I can do pretty much what I want. And what I want is to continue to play basketball. I still love the game, and I still have something to offer. My coaches and teammates recognize that. At the same time, I want to be genuine and authentic and truthful.

Jason Collins played with the Celtics and Wizards this season, his 12th in the NBA.

Why am I coming out now? Well, I started thinking about this in 2011 during the NBA player lockout. I’m a creature of routine. When the regular season ends I immediately dedicate myself to getting game ready for the opener of the next campaign in the fall. But the lockout wreaked havoc on my habits and forced me to confront who I really am and what I really want. With the season delayed, I trained and worked out. But I lacked the distraction that basketball had always provided.

Read the rest of this amazing story here

Fantasia Loses Her House After Failing to Sell at Preferred Price