NBA Teams Up with 'Lean In Together' for Gender Equality 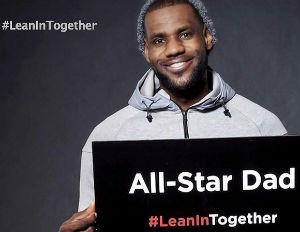 Sheryl Sandberg, chief operating officer of Facebook and longtime supporter of gender equality, has recently won the support of some of the biggest stars in the NBA to help spread her mission. In 2013, Sandberg publishedÂ Lean In, a book on women in leadership. She later started a nonprofit of the same name that is committed to offering women inspiration and support in achieving their goals professionally and at home. Now her new campaign, Lean In Together, has gained national attention, and big-time NBA all-stars including LeBron James and Dwyane Wade have joined the cause.

By partnering with the NBA for the project, LeanIn.org will attract a much bigger male audience. The campaign is expected to reach thousands of viewers with its latest public service announcement videos that debuted on ESPN March 5, in which athletes speak about their role in supporting the women in their lives. The video states, “when men lean in, everyone wins.â€

The Lean In Together website states that equality isn’t just good for women, it also benefits men and whole families. The site states that “children with involved fathers are happier, healthier, and more successful. Couples that share responsibilities have stronger marriages. Diverse teams and companies produce better results.â€

The website also provides helpful tools that men can use to access information that will help them to better support women at home, such as splitting household chores, expenses, and childcare duties. With a viewership demographic that is roughly 75% male, ESPN will be targeting dads and managers, men who can help advance gender equality and challenge male stereotypes.

Be sure to use the hashtag #LeanInTogether on Twitter and check out the full video below.

5 of the Worlds Best Marathons for Your Bucket List