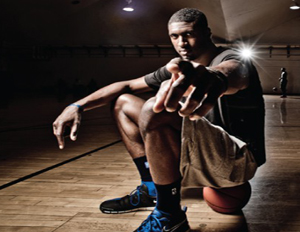 For NBA fans, Indiana Pacers center Roy Hibbert is probably more known for his postgame banter than his stellar performance during this year’s playoff games. His commentary after the Pacer’s Game 6 victory, in which the 7-foot-2 player uttered a gay slur (“no homoâ€), followed by a profanity, resulted in a $75,000 fine. Hibbert later apologized for his postgame press conference remarks, and went on to score a reported 18 points and 8 rebounds in 38 minutes against the Miami Heat in Game 7.

Despite his recent hiccup, Hibbert has made news again…but this time for his game off the court. The Georgetown University graduate is a hardcore gamer, and we’re not talking just the NBA 2K series. Hibbert has been a hardcore Call of Duty player since his college days. He’s a good player and a big fan, too. So much so that video game company Activision brought him out to the Electronic Entertainment Expo (E3) to check out Call of Duty: Ghosts. BlackEnterprise.com caught up with the avid gamer at his first E3 to talk about his interest in gaming, what he hates about multiplayer video games and why he’d like to be a character in the next Call of Duty title.

BlackEnterprise.com: What are your thoughts on E3 2013?

Hibbert: It’s a lot of game designers and a lot of games out here. I’m just happy to be associated with one of the best franchises in the gaming industry, Call of Duty.

You’re a big Call of Duty fan and you play online regularly. Which Call of Duty iteration did you start off with?

I started off with Modern Warfare 2. I love all of them, I played them all, but that’s the one I started playing online with.

It was reported in the past that you put your gamertag out on Twitter and you had to change it because things got crazy. What happened?

It was an unfortunate event. I direct messaged my gamertag to this girl and she went crazy, [saying] ‘if you don’t do this, that or the other, I’m gonna put your gamertag out there.’ So I took the power away from her and put it out there myself. Try to do something nice for somebody and this is how they treat you.

How often do you have to change your gamertag now?

I’ve changed it a couple times. I’ve gone back to an original one before. It is what it is, though. I play people and for some reason people know who I am when I play.

Startup Competition Winners Say Mentorship is The Key to Efficiency