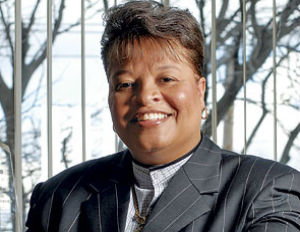 It’s no secret that the National Basketball Association (NBA) has a deficit of black owners. But a monumental move in Wisconsin with the Milwaukee Bucks helps diversify the face of sports ownership, thanks to a group of prominent local community leaders who now own part of the Bucks basketball franchise. This esteemed group includes Valerie Daniels-Carter, listed on the BE 100s CEO List. A headline speaker at the 2014 Entrepreneurs Conference, and a 2014 Women of Power Legacy Award winner, Daniels-Carter is one of the most powerful women in business. And now, as part of the Bucks ownership, she is one of the few female NBA owners. Period.

“PCI represents a historic collective of African-American community and investment-minded business leaders, “Daniels-Carter, the Â Co-Founder, President & CEO of V&J Holding Companies. “We see a unique opportunity to bring together a storied local sports franchise with a group of minority business leaders who are committed to ensuring that the benefits of this economic activity reach the full community,â€

Along with her brother, Daniels-Carter began the Milwaukee based V&J holdings company with an ownership in franchised quick-service restaurants. She and her brother began back in 1982 with just one Burger King Franchise. Now, they own 36 Burger Kings, 70 Pizza Huts, Haagen-Dazs, and Coffee Beanery’s. They stepped closer to working with the NBA when partnering with NBA legend Shaquille O’Neal in owning Auntie Anne’s pretzel franchises. The success led Black Enterprise to rank V&J holdings #33 on its 2013 Black Enterprise Industrial Service 100 List. Â Daniels-Carters partnership with PCI places her with a team of powerful Milwaukee entrepreneurs and community leaders including Michael Barber, Chief Operating Officer, GE Healthcare; Virgis Colbert, Former Executive Vice President of Worldwide Operations, Miller Brewing Company; Charles Harvey, Chief Diversity Officer and President of the Johnson Controls Foundation; and Cory Nettles, Founder and Managing Director, Generation Growth Capital.Â  The new ownership deal with the Bucks, described as “a bold new model of private, community and potentially public partnershipâ€ further achieves PCI’s goal in economic development for the Milwaukee community. And will hopefully serve as a catalyst for other similar partnerships across the NBA. “We think the PCI partnership model will be replicated throughout the NBA,â€ says Daniels-Carter, “particularly as a means of diversifying the ownership of NBA franchises.â€

In addition to partnering with PCI, the Bucks also extended ownership to Gale Klappa, CEO of Wisconsin Energy Corporation, and Jon Hammes, managing partner of Hammes Company. “Since I joined as an owner in July, I have already seen the huge strides we have taken on making the Bucks an integral part of the Milwaukee community,â€ said owner Jamie Dinan. Â “With these leaders joining the Bucks organization, the momentum on our side is undeniable. We look forward to utilizing their knowledge and expertise to build the future of Milwaukee.â€

The 2015Â Black Enterprise Entrepreneurs Conference + Expo hosted by Nationwide, May 13-16, at the Hyatt Regency Atlanta. Expect innovative sessions, high-powered speakers, and an early peek at the products, trends, and services you’ll need to stay ahead of the curve. Be sure toÂ enter our Elevator Pitch Competition to qualify for the $10,000 grand prize. To register and find out more, visitÂ dev.blackenterprise.com/ec/

[OPINION] Carolâ€™s Daughter is Our Daughter: The Pros and Cons of Being A Black Brand