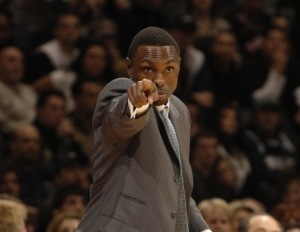 During his days as a point guard for the NBA’s San Antonio Spurs and other teams, he was nicknamed the “Little General.â€ At a modest (by NBA standards) 5-foot-11, Avery Johnson showed the leadership skill that enabled him to transition into coaching once his playing days were over.

Johnson gained notoriety by coaching the Dallas Mavericks to their first NBA Finals appearance and four consecutive 50-plus win seasons. Now, as head coach for the New Jersey Nets, the 46-year-old hopes to turn the beleaguered team around. He now has his work cut out for him, as the Nets finished up a dismal 12-70 the season prior to Avery’s appointment. In his first year as coach, the team improved somewhat to 24-58, but finishing just two games ahead of the last place Toronto Raptors in the Eastern Conference.

BlackEnterprise.com caught up with Johnson to talk about qualities in a good leader and how one can turn around the performance of an organization. Here’s what he had to say:

BLACK ENTERPRISE: You inherited a team that was perhaps the worst in the league.Â  How did you work to keep players motivated after such disappointment?

Avery Johnson: One of the first things we had to do was figure out how to change the culture within the whole organization.Â  We addressed that, obviously, with new ownership with Mikhail Prokhorov and our Russian group.Â  We’ve also made some other key strategic moves within the organization to eliminate in some areas, retain in other areas, but also add a different type of person with the right kind of DNA that we need to get the next elevated and catapulted in what I call a successful direction.Â  I think our focus, initially, and my focus has been more internal with auxiliary staff, also key upper level management positions to address those first. Then, in terms of the team, I had to sign some free agents, allow some guys to go and join other teams, and really just try to get my arms around this whole model in terms of how this team practices, how they travel, how they play games, how they retain information.

How do you change your culture?Â  Give me the biggest thing, the most significant thing that was done, other than new ownership, to change the culture?

When you start talking about the distractions, and especially the media plays a big part of everything, what do you do to keep the players focused?

What do you think are the most important qualities of leadership?Â  And how do you employ them now as a coach?

The Nets aren’t the most talented team in the league right now. How do you plan to get the most out of them?

Avery Johnson: The main thing is, t starts with having players that understand the need to train intensely in the off season.Â  We feel we gave them the necessary tools at the end of the season so that they can go and improve themselves in the off season.Â  We also understand that your great cultures, they have great players; and we know we have to improve our talent pool.

At the same time, we feel we’re going to be one of the preeminent franchises in basketball with us moving to Brooklyn, what I call a Taj Mahal of arenas in the Barclays Center, great ownership that’s willing to spend money in whatever area wisely to make sure that we have everything we need to be successful.Â  Jay-Z is really becoming more and more active in our ownership group, especially with us moving to Brooklyn, partnering with our Russian owner Mikhail Prokhorov and Bruce Ratner.Â  We feel we’re a team that can go from worst to first.

From College Graduation to Career Success: Your Step-by-Step Guide