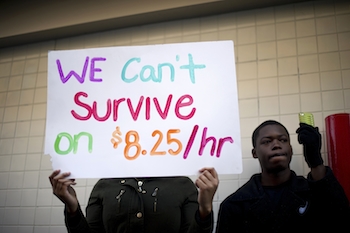 After Seattle’s Mayor Ed Murray recently increased the city’s minimum wage to $15 an hour, other cities within the U.S. are taking a stand for their young and elderly workers.

With congressional action stalled, a grassroots campaign to lift basic pay for all workers is picking up momentum at city halls and state legislatures around the country. Most notably, San Diego and Oakland, California are attempting to spread the word about raising the nation’s minimum wage rate to at least $10.10 per hour. While the GOP is on the record saying an increase on the federal level will only hurt the economy, President Barack Obama continues to rally support through the Internet with #1010Means campaign which highlights the benefits of raising the minimum wage.

“Urban areas tend to be more sympathetic to raising the minimum wage,” Ken Jacobs, director of the Institute for Research on Labor and Employment at UC Berkeley, says. “What we have seen are cities and counties work as laboratories of democracy.” As organizers continue to use community support through petitions and activism to raise awareness on the minimum wage discrepancy, the call has gone out that the current wage is not enough for the young to build a future with and the old to retire on.

If Congress were to agree to a boost in the minimum wage, populaces such as Oakland and Berkeley could stand to raise living standards, where nearly one in five residents live in poverty.

For more information about how you can help bring light to the minimum wage fight, please check out Raise The Minimum Wage.

6 Tips For Couples To Have A Successful Home-Based Business

The 10 Things You Didn’t Know About Harlem Haberdashery