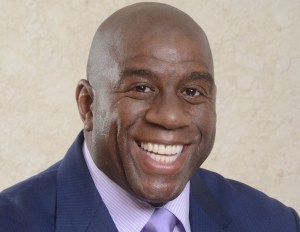 The key to extraordinary leadership is not just leveraging the right opportunities, but taking those opportunities above and beyond for long-term residuals.

NBA legend, two-time Hall of Famer and entrepreneur Earvin “Magic” Johnson has lived by the premise of over-delivery, having successfully built a business empire as chairman and CEO of Magic Johnson Enterprises (MJE), which provides products and services in ethnically diverse and underserved urban communities.

Johnson also serves as chairman of the media company that houses Vibe, Uptown, and Soul Train, and he’s the mastermind behind a stellar Starbucks partnership, leading to redevelopment in urban communities. His business empire has also expanded into sports team ownership and licensing, and he has given back to support heath, community and economic causes via the Magic Johnson Foundation.

The savvy businessman was a keynote speaker during theÂ National Black MBA Association Inc.’s 36th Annual Conference and Exposition in Atlanta Sept. 17, where he shared insights on his career longevity, his drive to succeed, the CEO mindset and his advice for young leaders of the future.

On standard of excellence and work ethic:

“When you over-deliver and become a perfectionist at what you do … when your work ethic is off the charts and you stay until the job is done … companies like mine and others that are here will come and find you. Â Remember, just because you get a job today, the real work starts tomorrow. The first one in the building has to be you. The last one to leave has to be you. You have to ask all the questions for how you can climb the ladder, but make sure whatever your job title is, you become the best they ever had at that position.”

On drive to succeed, from sports to business:

“When I started on that basketball court … I wanted to be the best that they’ve ever seen in that point guard position. I worked hard every single day to prove that. … The practice I put in each and every day …. I never settled for second best. I was the first one in the gym, working on my game, and the last one to leave, working on my game. Even as a CEO, 4 in the morning, I’m in the gym by 5, working out, and then I’m in the office all day long. What do I want to build? A best-in-class organization, with best-in-class executives and people of color who look like us.”

On landing the Starbucks deal:

My per capital is some of the highest in the business because I know my customer. In business, you have to be bold. … I went to Seattle to talk to Howard Schultz to bring Starbucks in the inner cities. I told him, ‘Black folk like coffee too…Latinos like coffee too.’ He said ‘We don’t do franchisees,’ and I told him, ‘I’m not here to become one. I’m here to be a partner.’

The greatest thing happened. Sometimes you have to take them to urban America… When you look at $1 trillion spending power of African Americans and $1 trillion spending power for Latinos, that’s a lot of disposable income that nobody was going after. So I decided to build my business going after that money. … Schultz said, ‘Let me come down and see how you manage your theaters.’ Thank God “Waiting to Exhale” was coming out at that time. [Laughs] … I had African-American women wrapped around the building. … About 30 minutes in, every black woman thought they knew Whitney Houston personally…talking to the screen like we do [Laughs]… [After the movie], he pulled me to the side and said, ‘Magic, I’ve never had a movie-going experience quite like this, but you know what, you’ve got the deal.’

On his most recent proud moment:

Who would’ve ever thought that the [Los Angeles] Dodgers would be for sale and I would beÂ part of a team to buy the team? All the hard work paid off… Your reputation is everything. Six billionaires called me, wanting to partner with me, to buy the Dodgers. … I decided to go to Guggenheim [Partners] because not only do they manage [billions of dollars] and I knew I could buy the Dodgers with them, but I knew I could do [multiple] other deals with them. … We’ve changed the experience…Now we’re the No. 1 team in home and road attendance. Our merchandise [is selling well]. … We lead the Majors.

When my mother came to the game, she started crying… She said, “You don’t understand… your grandfather used to cheer for Jackie Robinson and the Brooklyn Dodgers and now my son owns the Dodgers.”

On the CEO mindset:

How do you develop your people? The best people in basketball I know—Michael Jordan and Larry Bird—they made their teammates better. I try to do the same with my employees. I wanted to be successful and make money, but I also wanted to touch the community. … Just think about what we’ve been able to do. Because of our success rate, [those in the urban community] become our brand ambassadors. It’s really been great. I don’t have to talk about my brand because those who live in urban America already know my brand…they’ve talked about [it] for me. We’ve been able to touch them in a lot of ways—hire them, give back to that same community.

National Black MBA Conference: How to Rule the Corner Office