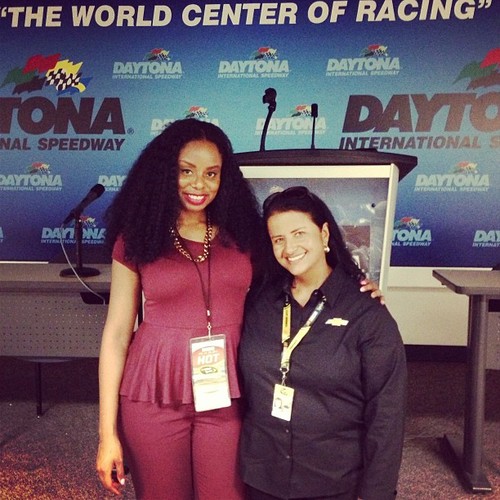 When Black Enterprise was invited to experience NASCAR’s Daytona 500 race, I was ecstatic. Not only was I happy that I’d be in Florida heat while New York temperatures hovered around the 30s, but I was even more excited to get reacquainted with something I’d been familiar with since my adolescence growing up in a family filled with men.

But one thing almost stole my joy. “What y’all going to NASCAR for?” someone said, when I told them I’d be traveling on business there. “There’s no black people in NASCAR. We don’t do that.”

I’ve never been a fan of “We don’t do that,” or “We don’t go there” with “we” referring to people of color. It’s a defeatist, ignorant phrase, and I simply hate limits, whether they’re based on socioeconomic, racial, gender or geographic factors.

And “we,” as in my brother, cousins and I have done that. We collected the race cars and cards. We ate the cornflakes from the box with Dale Earnhardt Sr. smiling with that infamous ‘stach on the front. We watched as our neighbors raced their remote-controlled cars down the dirt gravel on side streets of our neighborhoods. We were even there as dare-devil teens raced cars down what seemed like abandoned, dark roads (actions I wouldn’t recommend any teens replicate *wink*).

The Langley Speedway was just minutes away from where I grew up and even less distance away from my alma mater, Hampton University.

So, I was no stranger to racing.

True, I didn’t know about African American or female drivers, engineers or pit crew members at the time, but to be honest, the guys we did know about intrigued us, especially since it seemed so cool to a 10-year-old that someone could maneuver a car at such high speeds, around steep curves and beat out their competitor. And the colors and features of the cars were a major focal point at that age.

So let’s just say the opportunity to get reacquainted with my childhood fascination (and desire to compete with the boys) was one I couldn’t miss.

To say it was amazing would be an understatement. Not only did I get to ride in what they call a “pace car” at more than 150 mph on the same track history-making drivers maneuver at much higher speeds for 200 laps. (Check out live footage here.) I got to experience what it does to your body and senses, and how much athleticism, focus and mental endurance it takes to triumph in such a race. (My legs felt like noodles, but the adrenaline rush can be likened to riding a rollercoaster 50 times in a row).

I got a chance to talk to the men behind the wins—the pit crew leaders and members—who ensure the cars run at its maximum capacity and are safe to drive. These guys work out at least four times a week, have engineering knowledge and are masters at strategic planning. They hustle against stress, intense timing requirements and pressure, are constantly on the road training and competing, and have a passion for every aspect of the sport, from automotive manufacturing, to marketing and promotions. (Check out pics here.)

I got to be a spectator, in the stands at the back stretch, where hundreds of thousands watch all 200 laps of a sport that includes points and relies heavily on patience, planning, and strategic maneuvering that can make or break a win. I watched first hand as my Daytona 500 favorite, Danica Patrick (who was theÂ first female NASCAR driver to win a NASCAR Sprint Cup Series pole), came in to the finish line 8th, a record for female drivers as well.

I traded laughs and quips with Â Darrell Wallace Jr., a young NASCAR heavyweight, and the firstÂ African-American to win the Rookie of the Year award in a NASCAR series. I got to network and talk with motorsports professionals, PR reps and other young bloggers and journalists from outlets including MTV, Beats by Dre and ESPN.

Throw in meeting TI and Tiny and eating some great Southern concession food (hot dog panini anyone?) and you’ve got an experience of a lifetime.

When it comes to life and exploring the world, it’s not about “We don’t do that.” It’s about being open to doing and experiencing whatever extraordinary things life puts before me and being a resource to those who may not have the luxury. It’s about opening doors that may have been closed or just cracked. It’s about stepping outside of boundaries and making our own lanes, kind of like all bosses do, whether it’s Darrell Wallace Jr., Danica Patrick, Oprah Winfrey or President Barack Obama. You think the world would be as great as it is if Obama said, “White House? There’s no black people there. We don’t do that.”

Progression happens when people break away from stereotypes and fears and move forward into innovative business and engagement. I’m happy that the folks at NASCAR and Taylor Strategy PR understand that and gave me the chance to relive good childhood memories.

Connecting. Embracing. Participating. Engaging.Â We did that.

And those are the kind of boss moves I plan to continue making for the rest of my life.

Money Matters: How To Pay Taxes If You Don’t Have the Money

The Black Role in Motorcycle Culture is Celebrated