Namibian Teen Shines as Inventor of â€œFree to Callâ€ Phone 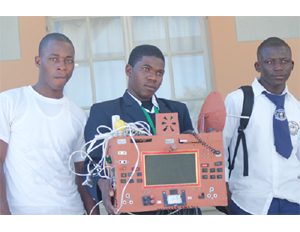 A teenager in Namibia is gaining a lot of attention from the tech world for a mobile phone he invented. Simon Petrus created a phone that uses radio frequencies to make calls, and it doesn’t require a SIM card or airtime credit.

What’s more, the talented teen made the phone from spare parts, including scraps of old televisions, a working radio, a light bulb, a fan, a socket, an expired mobile phone SIM card, and other older mobile phones.Â According to The Daily Mail, the phone also attaches to a box, and it allows the user to view one TV channel on it. It also has sockets for charging other cell phones. His parents, both of whom are not working, scrapped together $2,000 so their son could fund his project.

According toÂ New EraÂ journalistÂ Helvy Shaanika, Petrus’ invention won first place at the regional level at the NamPower schools’ competition. “The relatively shy learner claims he had worked on his latest project for about two years,â€ reportsÂ Shaanika.

This is not his first invention, however. Last year, Petrus won a young innovators competition for creating a machine that doubles as a seed dryer and a cooler. Most of the country’s people engage in subsistence agriculture and herding. Some of the judges in last year’s competition were convinced that Petrus was receiving help from professional engineers with his inventions.Â  His teacher claims that the young man is an average student overall, but excels in science.

Some of the judges in last year’s competition were convinced that Petrus was receiving help from professional engineers with his inventions.Â  His teacher claims that the young man is an average student overall, but excels in science. It was his teachers that told the judges that Petrus’ inventions were all his own, and that the only help he received was from teachers.

The tech scene has been exploding across the African continent. Innovators such as Petrus are cropping up from many African nations. So much so in fact, that CES, one of the largest annual tech events in the world, will feature for the first time ever, an exclusive showcase of the most innovative and cutting edge tech from the African continent.

Register for Black Enterprise’s TechConneXt Technology Summit: The Intersection of Innovation and Opportunity being held on October 10-11, 2016 at the San Francisco Marriott Waterfront Hotel!

How’d You Do That?: Travel Writer Kristin Braswell Talks Living Her Dream