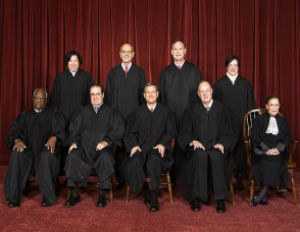 Justice Breyer, echoing the sentiments of several Justices, highlighted the fact that the landmark case, Reynolds v. Sims (1964), was concerned with representation of persons regardless of whether they vote or not, said Leah Aden, an attorney with LDF. Justice Kagan stressed the original intent of the Fourteenth Amendment that “[n]umbers [of people], not voters; numbers, not property; this is the theory of the Constitution,â€ a point also expressly raised by LDF’s brief.

The plaintiffs in Evenwel have asked the Court to use an undefined, new standard of “eligible voters,â€ instead of total population based on solid U.S. Census data, for state legislative redistricting. The process of defining this term would create ample opportunities for political manipulation and discrimination. Under an “eligible voterâ€ measure of state redistricting, at least 20 million black people–including children, unregistered voters, and many others–could be denied equal representation. The largest group of people that would be affected under the “voterâ€ standard for redistricting that plaintiffs seek are 75 million children across the country. African American and Latino people are, on average, younger than the population at large.

The Court, and in particular Chief Justice Roberts, asked probing questions about the practical impact of counting only “eligible votersâ€ for apportionment. Texas, like other jurisdictions who would be required to redistrict, acknowledged that an apportionment process based on “eligible votersâ€ would cause every state and local jurisdiction, including school boards and county and city commissions, to redraw their legislative districts. However, under current law, creating state legislative districts with equal populations fosters access to electoral representation and constituent services regardless of age, race, class, religion, or other characteristics. Using total population provides everyone equal representation, not just those who vote.

More than 50 years ago, the Court outlawed the fencing out of select groups of people in the redistricting process (Gomillion v. Lightfoot, 1960) and, just four years later, held that the Equal Protection Clause requires that legislative districts be substantially equal in population (Reynolds v. Sims, 1964). Over the past half-century, the use of total population as the starting point for redistricting has enjoyed overwhelming bipartisan support among state and local governments. An amicus brief of 21 states, signed by 11 Democratic and 10 Republican governors, joined Texas in urging the Court to affirm states’ ability to draw districts based on total population.

Likewise, in the context of federal legislative redistricting, the Constitution requires that congressional districts be drawn based on total population as determined by the U.S. Census, which Justice Kagan emphasized. This underscores that the Census’s count of total population is the most accurate and neutral data. Changing the system is both unnecessary and unworkable: The amicus brief of Stanford Law Professor Nathaniel Persily and other experts on the Census concluded: “Rarely can one say of a constitutional argument that it is not only wrong, but it is impossible … A national database of eligible voters does not exist and will not exist in the foreseeable future.â€

One issue that the Court repeatedly focused on was the representational interest of children. As the amicus brief of the Children’s Defense Fund and others urged: “This case is about the ability to have a legislature that represents all the people equally, and about the foreseeable and inevitable negative effects of declaring that children ‘don’t count.’ The State of Texas, for good reason, has chosen to define the ‘people’ entitled to equal representation to include children, among other nonvoters. This Court, at a minimum, should uphold its power to do so.â€

Solo Entrepreneurs: 4 Tips to Help You Thrive, Not Flop