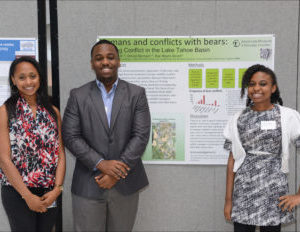 Last week I was thrilled to attend the fourth annual Student Research Colloquium of the NYC Science Research Mentoring Consortium, held at the American Museum of Natural History. Top students from across the city gave presentations and poster sessions based on their original scientific research.

Students were mentored by scientists from AMNH as part of its Science Research Mentoring Program, or SRMP, or one of its 12 partner institutions’ programs, including the Earth Institute of Columbia University—Lamont-Doherty Earth Observatory, the CUNY Remote Sensing Earth Systems (CREST) Institute, and the DNA Learning Center of Cold Spring Harbor Laboratory, among several other distinguished programs.

One hundred high school student scientists tackled such rarefied subjects as the variability and evolution of the CIRBP gene in reptiles, to the deciphering of chaos through gravitational dynamics.

The Sounds of Science

At the presentation of Mariam Abalo-Toga, Langston Kosoff, and Abraham Derival, the three student scientists presented their findings on the sounds black holes make in space. Under the guidance of Imre Bartos, a research scientist from Columbia University, the students did university-level research that involved meeting for two hours, twice a week over the past year, not including the research they did outside of their meeting time.

“I always knew I wanted to do research, but I wasn’t really sure how to go about it,” Bartos told me. “I wish I had been in a program like this when I was in high school.”

Abalo-Toga and Kosoff are public school students who found out about the AMNH program online; Derival is homeschooled.

“I am one of the few African American conservation scientists,” she told me. “I actually go out into the wild and track black bears.”

She provided guidance to Brielle Randall and Omari Romain, who presented on “Humans and conflicts with bears: mapping conflict in the Lake Tahoe basin.”

I heard presentations on the mitochondrial genome of snakes in Madagascar, on invasive starlings—which are now found throughout the entire U.S., on the bacteria that lurk on coins, and on the “Role of rivers in the speciation of the blue-crowned manakin”—a pretty black South American bird that wears a blue cap.

Got a budding scientist at home? To find out more about SRMP, which has young people doing real science under the mentorship of accomplished university scientists, go here. 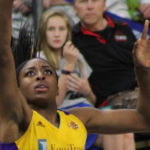 This Entrepreneur Knows Self-Care Is the Most Important Investment