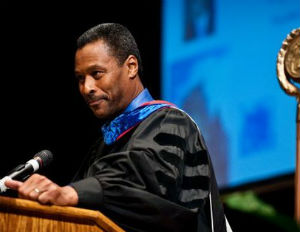 During Dr. John Silvanus Wilson‘s inauguration speech a month ago, he spoke of a cradle-to-prison pipeline for black boys who face imprisonment during their lifetimes at alarming proportions. Sworn in as the 11th President of Morehouse College, Wilson delivered an urgent call to action to achieve a cradle-to-power pipeline for African American men. Prior to that position, Dr. Wilson was appointed by President Barack Obama to serve as the executive director of the White House Initiative on Historically Black Colleges and Universities (HBCUs), a position he held since 2009.

BLACK ENTERPRISE spoke to Dr. Wilson about the crisis that faces young black men and what role HBCUs like Morehouse can fill to change the direction. Here’s what he had to say:

When you speak of the cradle-to-prison pipeline, what are some of the things that can be done?

The first thing we have to do is recognize that it’s a very serious issue–some would call it a crisis–and something needs to be done. You may think that goes without saying but it’s not. There’s a numbness that people in this country–black and white and around the world–have to what’s going on with the African American male. If other groups had the kind of educational data profile that the African American male has, it would be nothing short of a crisis. But for some reason, too many people find it tolerable or natural in some way.

So, I think recognizing that it is a critical issue that goes to the productivity and security of this country is step one. Step two is developing a sense of urgency once you recognize it; and step three is organizing to get better data about it and exchange a best practices designed to do something about the challenge. In the midst of all that, we need what we haven’t had and that’s a shining beacon on the hill–an institution that’s recognized worldwide as the destination of choice for men in general and in particular African American men and that’s Morehouse College.

What can be done on a personal level?

First, I think the steps that I outlined are relevant for individuals as well as institutions. Number two, parents can address the cycle by ensuring that their sons are exceptions to the general rule. And even if you’re not a parent, there are many organizations that care about this issue and you can align yourself with them and you can become involved– politically and otherwise.

I was very pleased that the President of the United States announced a “My Brother’s Keeperâ€ initiative designed to get at this. I think some people have recognized that. I think the President is making an attempt to sound an alarm that there is a crisis.\

RELATED: My Brother’s Keeper for ‘The Sake of the America’s Future’

What do you plan to do in your role as President of Morehouse to contribute to a solution?

But it needs to start at home first,Â doesn’tÂ it?

I’ve got to tell you. That is the toughest issue–the fact that a lot of these changes are indeed within the province of our control. I have a son and twin girls and my job, first and foremost, was to make sure that my son is reflective of the ideals and the values that we hold. Then job number two is to look at the rest of your family and make sure no one is reflective of that negative data profile. If you go to church, you can make sure that every male–or every person–is invested in the life of a mind. We need to broaden it in the African American community.