Monty Williams Is Out In New Orleans 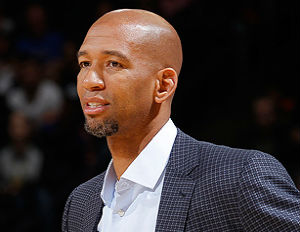 Head coach of the New Orleans Pelicans, Monty Williams, will not return next year. Per a statement today from the Pelicans’ front office, Executive Vice President Mickey Loomis says, “Making a decision like this is never easy and is never done hastily, especially when you are dealing with a person of Monty Williams’ character. We thanked Monty for the tremendous work and commitment he made to our organization and the development of our young players, specifically Anthony Davis,â€ said Loomis. “While we continue to work towards improving our roster, we decided that now was the time to make this decision. We wish nothing but the best for Monty in the future.â€

[Related: The NBA Is Hosting A Camp In Cuba]

The decision follows a season in which the Pelicans finished 45-37, their highest win total since the 2010-2011 season, when the team was led by current Los Angeles Clipper Chris Paul, and Indiana Pacer David West. The current version of the team is led by fresh faced 22- year-old Anthony Davis, a former 1st team All-Rookie and two-time All Star player, as well as a sensational defensive player. The Pelicans advanced the NBA Playoffs for the first time in 4 seasons, where they were beaten by the league leading Golden State Warriors in the first round of this years playoffs four games to none.

Pelicans owner Tom Benson had this to say: “I have the utmost respect for Monty Williams, not only as a coach but as a person… He represented our team, our organization and our city with tremendous class and dignity. Gayle and I grew very fond of Monty and his wife Ingrid and of course their five beautiful children. We wish him nothing but the best moving forward.â€

Starting with the team in 2010, Williams recently finished his fifth season as head coach, amassing a record of 173 wins and 221 losses.

With it’s mix of young talent, a recent trip to the playoffs, and superstar player Anthony Davis – the Pelicans might be the most sought after head coaching job this offseason, competing with the Orlando Magic, and the Denver Nuggets.

Per an ESPN report, the Pelicans front office is considering offering Anthony Davis a five year, $140 million contract to keep him with the team long term, but the deal is dependent upon the salary cap as a result of a new massive $24 billion NBA TV deal.